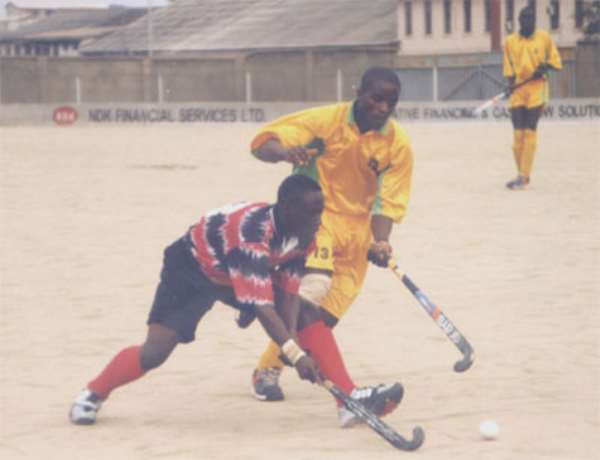 A cross-section of the youth of Ghana celebrated the annual Worldhockey global marathon with a series of activities during a well-attended event at the National Hockey Pitch in Accra. The theme for the global celebration was “The Big Try out” which focused on encouraging young people to become involved in umpiring.

Some 210 youth made up of 155 boys and 55 girls from the Greater Accra, Ashanti and Eastern Regions took part in the event which was supervised by 17 school sports teachers, 5 youth trainers and 3 coaches. The chairman of the GHA, his vice, the Secretary General, the member in charge of Events and Competition and the member in charge of secretariat and media relations participated in the event.

Setting the day's activities in motion, the chairman, Oko-Nikoi Dzani indicated that the celebration was an annual worldwide event which was aimed at getting the youth interested in the sport and encouraging them to take it up for the future. He assured the participants that the sport was one of the main Olympic sport, as well as a competitive and rewarding one. He assured them that the sport offered a lot of avenues for an individual to develop mentally as the very nature of the game tasks players to employ the highest levels of creativity. He reiterated that sports was an important component of educational development and encouraged participants to erase the erroneous impression that sports was not for the top-rated students citing examples of celebrated hockey players who are medical officers, Accountants, Legal Practitioners and scientist to mention a few. He expressed the wish of the GHA to facilitate the provision of very good pitches, preferably, artificial turfs in some of the regions citing Ashanti in particular.

In the implementation of the plan for the day, eight (8) workstations were manned by Coaches, Trainers & Umpires and the main activities were discussions on various aspects of the game and playing of the game. To offer an opportunity for the participants to learn more as umpires, the topics and discussion centered on the principles of umpiring, offences in the game, hockey officials in a game, signaling, warnings and suspensions, umpires and whistling, offences that constitute award of a penalty corner or penalty stroke and communicating with an umpire on and off the field of play. The second part of the workstation activity was a mini game.

At each workstation, discussions took about 7 minutes and the other activities (Mini-hockey) took about 9 minutes with youth participants being in charge of umpiring.

Special thanks goes to all the authorities of the school that permitted their students to participate in the event. The GHA acknowledges the commitment of such officials to the development of the sports and encourage them to sustain the gains they have made so far. To the sports teachers and the youth trainers, the GHA offers special thanks for your unflinching support in the development of the game in Ghana.