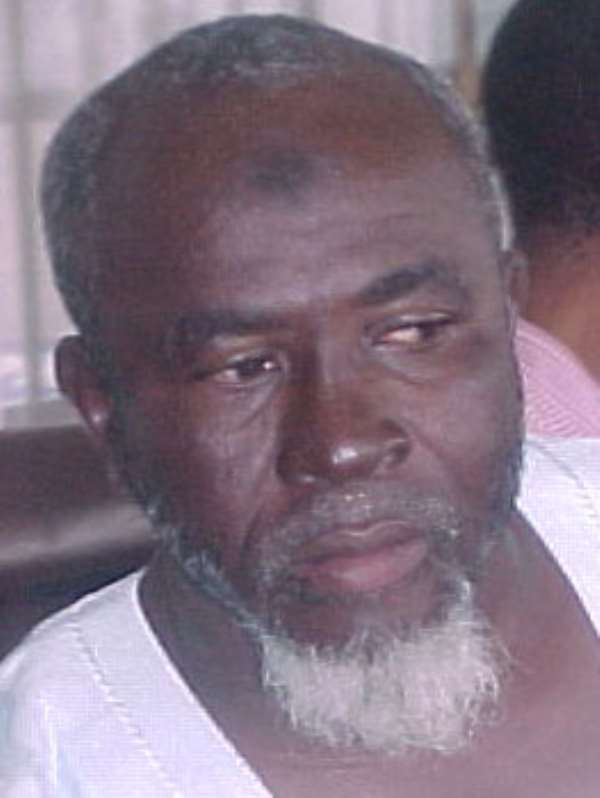 FOOTBALL maverick, Alhaji Karim Gruzah, last Wednesday stirred the utmost in violence, spilled blood and pierced his fore fingernail deep into the eye of a football fan at the Kpando Stadium.

The fan, identified as Raymond Afram, bled profusely from the right eye, the object of Gruzah's gruesome attack, and underwent surgery at the Eye Department of Marquart Hospital, Kpando, to repair the damage caused by the assault.

It required a detachment from the Kpando District Police under the command of Superintendent A.A. Salifu to fire warning shots, disperse the crowd and sneak Alhaji Gruzah out of what could have been a tragic aftermath to an interesting football match.

Alhaji Gruzah had exhibited hysteria through a greater part of the match between his team King Faisal and the host team, Heart of Lions. The game ended 1-1.

On regular basis, he charged from his seat to lodge complaints with the Match Commissioner, Mr Harry Atutom, of Ho, and at one point, he was seen openly threatening the first assistant referee.

As the fans hooted in disapproval of his behaviour, Alhaji Gruzah charged again on the Match Commissioner, ordering him to let the police take a fan out of the stadium for disturbing his (Alhaji) peace.

His worst was however reserved for the end of the match, when he pounced on Raymond Afram, a fan at the game, to inflict a severe eye injury.

At that point, the crowd surged towards Gruzah apparently to seek revenge but were restrained by Chief Superintendent of Police A.A. Salifu and his men who kept the Faisal Chairman for more than an hour after the match, behind heavy security in the dressing room.

As the crowd waited patiently showing no signs of letting Alhaji off the hook, the police reacted with warning shots and in the ensuing commotion, whisked Alhaji Gruzah through after more than an hour of captivity.

It is not known if he has been charged with assault but Graphic Sports learnt that Gruzah has been released on bail.

As the fans chased him and the speeding police vehicle, he was cursed for driving his finger nails into the eyes of a football fan and for insulting match officials during the match.

The fans were angered by the sight of blood oozing from the eye of the fan. And as the victim was being rushed to the hospital for treatment, the angry supporters charged on Alhaji Gruzah causing the police to escort him into the dressing room with the support of the Volta Regional Sports Development Officer, Mr C.K. Doe.

In spite of these, furious soccer fans who during the match witnessed Alhaji Gruzah threatening the assistant referee as well as the other officials, felt enough was enough for King Faisal's Chairman.

At one stage during the match, Alhaji Grusah ran to the match commissioner, Mr Harry Atutom of Ho to order the police to send out some one out side the stadium for allegedly disturbing his peace but the person refused on the grounds that he Alhaji had no right to trample upon his fundamental freedom.

After the match, it took more than 40 minutes for Faisal coach Francis Oti-Akenteng and his team and the bus to heed to the persuasions by the Volta Regional Sports Development Officer to leave the stadium without their chairman, who was being kept by the police for his own safety.

Speaking to the Graphic Sports later the Chairman of Heart of Lions Football Club, Mr Victor Ahiakpor expressed concern about the behaviour of some club officials whose only aim is to intimidate so-called small clubs.

He said such attitudes only turn to undermine not only their credibility as a club leaders, but also ruin the spirit of fair play in football.

Mr Ahiakpor stated that one thing Alhaji Gruzah had to bear in mind is that Chief Executives of clubs need to set good examples for their followers to emulate.

In an interview with the Graphic Sports, at his Marquart Hospital bed side, Mr Raymond Afram with his eye plastered, said his only crime was his attempt to talk to Alhaji Gruzah to refrain from insulting the match officials.

According to him, the King Faisal chairman would not even listen but pounced on him and pierced his finger nails into his eye and pushed it deep into his eye socket as he struggled to free himself.

A photographer, Mr Asante Cudjoe, who attempted to take some shots of the assault scene, had his camera seized by some men believed to be with the King Faisal chairman and the roll of film destroyed. The camera was later released to him.

In a related development, Abdulai Eliasu, 25, was rushed to the theatre after a flying object hit the back of his head with serious injury to his head

If Ghanaians retained Akufo-Addo, we'll also endorse all his...
12 minutes ago