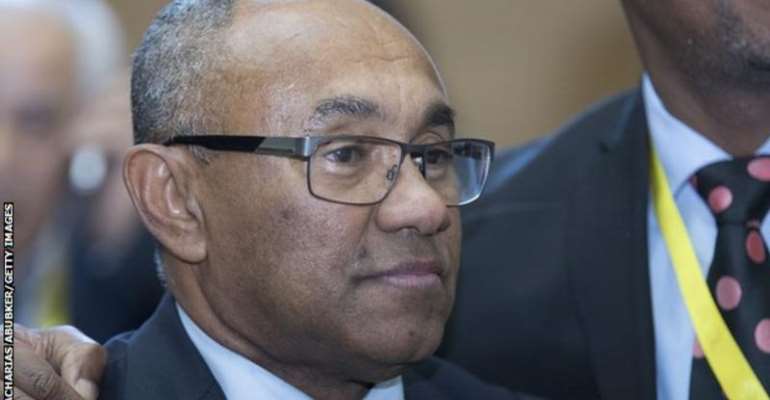 When the idea was first put to Madagascar's Ahmad that he could lead the Confederation of African Football (Caf) one day, his riposte was succinct.

"'You are crazy', I told them," the new Caf president told BBC Sport.

A few months on, the 57-year-old holds the future of the African game in his hands.

He sent shockwaves throughout Africa on Thursday when managing what no one else ever had - beating Issa Hayatou, who took power in 1988, in a Caf election.

Prior to announcing his candidacy in January, few had ever heard of Ahmad.

But the reason he was approached by 15 or so FA presidents from across the continent - first in May, and then again in September (when the seed started to germinate) - was because he was on the Executive Committee (ExCo).

And after Hayatou oversaw a rule change in 2012, seen by many as a plot to prevent a rival seeking his job, only voting members of the ExCo can run for the presidency.

So who exactly is Ahmad, what does he hope to achieve during his four-year spell in charge and how did he rise to power?

THE MAN
Firstly, Ahmad - who goes by just the one name - once played and coached in Madagascar's top division.

After quitting football, he ultimately ventured into politics - holding positions as his country's minister of sport, and then of fisheries - before becoming a parliamentary senator, a role he still holds today.

After becoming Madagascar FA president in 2003, he was elected onto Caf's ExCo ten years later - before, in January, he confirmed rumours by announcing he was challenging Hayatou.

"At the beginning, I heard the comments of people - 'he's nothing, he's like a joke,'" he told BBC Sport.

Today, the 'joker' is king and holding all the aces.

Ahmad and his supporters celebrate his victory over Issa Hayatou in the Caf presidential election.

HIS AIMS
Ahmad wants improved governance, greater transparency and to develop African football from the grassroots up.

"The first thing is reform of administration: good governance, financial transparency and to redistribute the Caf money - not only keep it in the office," he told BBC Sport.

As Caf revealed on Thursday, its finances are healthy - with $108m in cash and $131m in equity.

For cash-strapped Malawi, who briefly withdrew from the 2019 Africa Cup of Nations because of financial concerns, the redistribution cannot come soon enough.

"The member associations will now have a chance to enjoy the wealth that Caf has had all these years," Malawi FA boss Walter Nyamilandu told BBC Sport.

"We have been marginalised, suffering a lot, paying a lot of expenses for our national teams and exerting unnecessary pressure on our governments. It is now time to be inclusive."

Ahmad also wants to reorganise Caf's competitions, which could mean the expansion of many, including the flagship Nations Cup - 'an idea,' admits Ahmad.

Under Hayatou, secrecy was the watchword when it came to financial dealings but Ahmad's stance is entirely in contrast.

'All contracts signed by Caf will be officially published and their amounts communicated by media releases,' his manifesto boldly pledged.

'Caf will be fully transparent with regards to finances, management and its competitions. Nothing will be hidden or covered during my mandate.'

With that in mind, the BBC can reveal that a Caf insider says the eight-year deal signed with energy company Total last year is worth 'about $190m.'

Having declared that long-term contracts should be 'banished,' could Caf's agency deal with Lagardere - worth a whopping $1 billion to the African football body, and which runs from 2017-2028 - be at risk?

"I can't talk about that because I've never seen the contract. I have to look at all of this," he said on Friday. "My duty is to protect the interest of Caf."

Following his election, Ahmad said his first step would be a thorough managerial and financial audit of the Cairo-based organisation.

To develop the African game to its ultimate potential, he wants to open talks with a range of personnel - 'legends, stars, coaches, referees' etc. - boost women's and youth football as well as, among other measures, stop the talent drain of Africans overseas.

Crucially, with half a dozen of Ahmad's supporters elected onto a new-look ExCo in place of Hayatou's men, the Malagasy has the backing to push through his reforms.

HOW DID HE SUCCEED?
He succeeded because of an overwhelming desire for change among the voters and, says Ahmad, 'government authorities' too.

So long had Hayatou's reign - encompassing 29 of Caf's 60 years - been that the hashtag 'Hayatoumustfall' circulated on social media.

Yet had Gianni Infantino not won last year's Fifa presidential elections, beating Sheikh Salman of Bahrain - who Caf had publicly asked its members to support, Ahmad may not even have run.

"It's one of the arguments that pushed me to go for this election," he told me on Tuesday.

Infantino emerged as a potential kingmaker when attending a party in Harare hosted by Ahmad's campaign manager Phillip Chiyangwa, in what was seen as a sign of support for Hayatou's rival.

"(Infantino) could not go back and support people who did not support him (in the 2016 Fifa elections) - it doesn't make sense," Dennis Idrissa, one of Ahmad's campaign team, told BBC Sport.

"But he did not interfere - he stayed as the president - but in his heart, he liked change."

Members of Hayatou's camp have argued otherwise. Infantino has denied any collusion.

Just like the latter's speech which swayed many voters in Fifa's presidential elections of February 2016, Ahmad spoke in various languages while also promising more cash to member associations (and business class travel) as he addressed delegates before the vote.

"It was a statement full of promises," said Lesotho's Khiba Mohoanyane. "Ahmad's speech changed the mood of the house."

Minutes later, a campaign full of twists and turns - threats and accusations - ended in a 34-20 win for the Malagasy.

Cosafa led the call for change and one wonders what would have happened had outgoing president Suketu Patel, a Hayatou ally down the years, decided to contest Cosafa's elections in December - since his absence ultimately handed Chiyangwa a platform upon which he screamed for change.

WHAT ELSE WILL CHANGE?
Will the Egyptian legal case against both Hayatou, 70, and secretary general Hicham El Amrani quietly fade away?

Brought by the once little-known Egyptian Competitions Authority, Caf has firmly dismissed allegations its deal with Lagardere broke the country's anti-monopoly laws.

In a statement earlier this week, the African football body accused Egyptians of trying to tarnish Hayatou's reputation in the run-up to the vote. Whatever the truth, the Cameroonian has now gone.

In one small way, Ahmad can already claim to wield more power than his predecessor.

After Zanzibar was voted in as Caf's latest full member, Africa now has 55 votes at Fifa - so enlarging its status as the most powerful continental voting bloc in world football.

Finally, one thing about his reign is absolutely certain.

He won't be around for three decades since a recent rule change means the maximum tenure for a Caf president is now three terms - or twelve years.