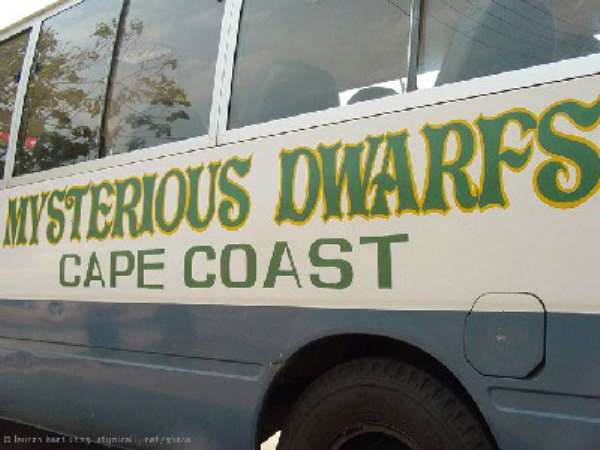 ... King Faisal Excused From Duty GIANT-KILLERS, Ebusua Dwarfs, have a duty to prove to their critics that their upset of Hearts last Sunday was no fluke when they battle Ashantigold at their favourite Siwdo Park in Cape Coast this afternoon.

This duel more than qualifies to take the place of the rescheduled top liner involving Hearts of Lions and King Faisal, both in terms of thrills and attraction.

What Ashantigold have in young goal poacher, Shaibu Yakubu, Dwarfs have it more in Michael Amissah, Ekow Ghansah or skipper Douglas Mustapha who spearheaded the coup de grace of Hearts.

The outcome of this thriller could be highly determined by the kind of strategies the two coaches, Mohammed Ashraf of Egypt and Dutchman, Has van der Pluym, will devise for their respective teams.

Incidentally, both teams won their opening league games and would therefore want to maintain their winning form.

After their fruitless trip to Berekum last Sunday, Asante Kotoko who return to their favourite home base would need nothing short of victory to appease their faithful fans.

Perhaps this is the time for newly-signed on striker, Nasiru Gani, and the old stars like Nana Arhin Duah, Yusif Chibsah and others to prove to their fans that all is not lost.

Though they are not in the best of shapes, the Porcupine Warriors can capitalise on RTU's record as poor league starters to clinch their first league victory.

At Koforidua, crestfallen Accra Hearts of Oak have their pride to protect when they face another new entrant, Kade Hotspurs, in a dicey encounter.

Like the Phobians, Hotspurs also lost 1-0 away to Feyenoord and will like to make amends against Hearts. This match will surely put to test the time-tested record of Hearts of hardly tasting two defeats on the trot.

In Accra, Panasonic-sponsored Liberty Professionals will vent their spleen on Real Sportive after tasting a 1-0 defeat at Obuasi last Sunday.

At Tema, Power FC will need some extra energy to handle the twinkle twinkle little stars, Feyenoord Academy, as they extend their brand of quality soccer to the Harbour city.

Fresh from their impressive 2-1 victory over Kotoko, tough customers Arsenals embark on yet another escapade on the mountains when they confront new-look Okwawu United at Nkawkaw.

Having failed to “do the do” at home against Power last Sunday, Sekondi Hasaacas trek to Sunyani in search of at least a point against local Bofoakwa who suffered the heaviest defeat in the first week. King Faisal Excused From Duty (Joy Online) -- Ghana's sole contender in this year's CAF Competitions, King Faisal has been given a relief from their mid-week premiership game against Kpando Heart of Lions.

This is to enable the club prepare for their crucial CAF Confederation Cup second leg tie against Bendel Insurance of Nigeria on Sunday in Kumasi.

The first leg game ended goalless a fortnight ago in Nigeria. Chief Executive Officer of the club, George Amoako told Joy Sports that in view of their impending must-win game against the Nigerian club, they put in a request for postponement of the game.

Faisal argued that the club would have lost three days of training if compelled to travel to Kpando and back for the Match day 2 clash.

The Professional league board has now fixed the game for April 27.

King Faisal's league game against Kotoko this weekend has also been postponed to enable the team clear the Nigerian hurdle.

Mr Amoako says though Sunday's game is dicey, he believes Faisal will go through unscathed.