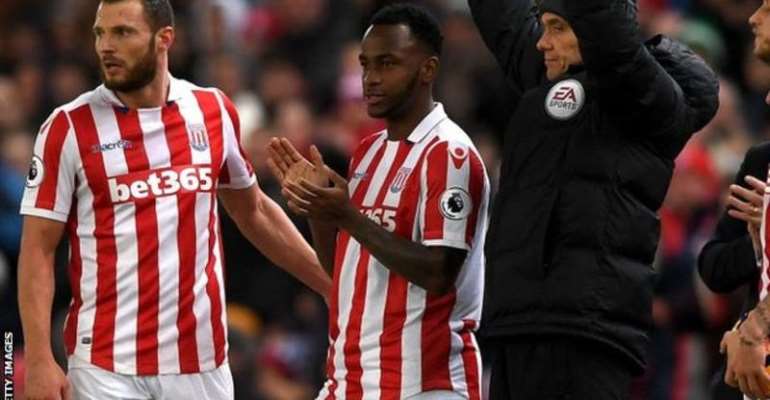 His comments follow newspaper reports the striker was banned after failing an out-of-competition drugs test.

Hughes said the 23-year-old, who joined the Potters for £12m in January, was banned for a “Football Association disciplinary matter”.

The Welshman said he saw no reason for Berahino not to face his former club at the Hawthorns on Saturday.

Hughes, 53, said the forward had “issues at his previous club for 18 months”, adding: “We were aware of that before we signed him.

“As with all players, we did our research on him before we signed him, but that didn’t change our thinking at all.

“In terms of more detail, you would probably need to refer back to his former club, West Brom. We are pleased with what he is producing and he is looking forward to the game tomorrow.

“Why wouldn’t I play him?” added Hughes. “He is in line to be involved.”

West Brom boss Tony Pulis confirmed Berahino served a ban, but would not comment on why.

“He didn’t play for me because he wasn’t fit enough,” added Pulis. “This football club looked after Saido very well while he was here. The club looks after all the players.

“Saido was one of the main reasons this club stayed in the Premier League two seasons ago. In his own mind he wanted to move.”

The FA said it does not comment on issues regarding doping violations unless they breach the World Anti-Doping Agency code.