Opinion: Bastardised refs are humans too but GFA review panel doesn’t think so 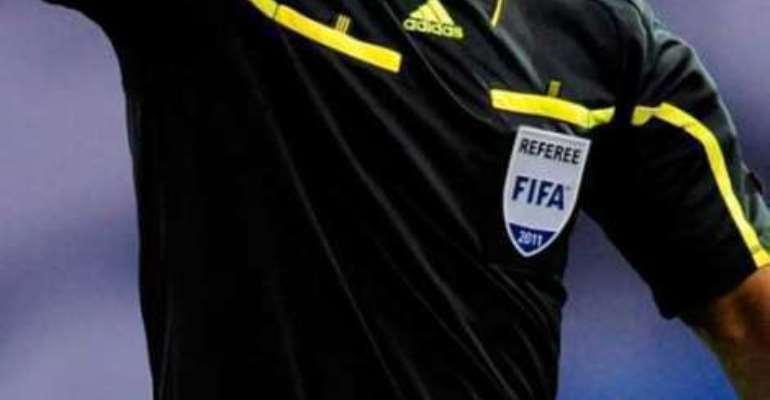 On Monday morning there were pictures making the rounds in the many whatsapp  sports groups that should shock all of us into action.

It was a picture of referee Sampson Azumah, a deep cut in his head, his jersey soaked in blood and later bandaged.

His crime was to have been the centre referee in the match between King Solomon and Great Olympics which the away side won. The home fans didn't like that, they didn't like the refereeing so they did what they know best; descend into the barbaric act of beating the referee.

It is mentality endorsed at the highest level in Ghana football and recently, the GFA has made decisions that bothers on that sort of thinking.

Last week the Ghana Football Association was doing it's best to put the fear of God in referees.

Clearly sick of all the poor refereeing calls that tends to breed disaffection for the local game and create chaos, the GFA has set in place a panel called the  Referees Review Committee that reflects on major calls upon complaints and then dishes out punishment when it deems it appropriate.

The idea behind the review panel is that it puts referees on their toes and ensures that as much as they can, they get key calls right. It is premised on this notion that once referees know there are consequences for bad calls then they would strive to get the calls absolutely spot on.

It is a slippery slope but the review panel and the executive committee which ratifies the recommendations does not feel the same way. In their mind the act of naming, shaming and banning is the way forward.

And sadly there are not many voices willing to speak out against a committee that could be making the problem of refereeing worse in Ghana rather than better.

Are there many bad referees in Ghana? It is a definite yes. There are calls that shames the profession and calls that leaves too many question marks about the integrity of the game.

Do the referees make those calls deliberately with an agenda to favour specific teams? Some of those in the know including club chairmen and officials say yes. Some of those in the know also say that the act of skewing games in favour of specific teams is a practices happily encouraged by club officials who are more than willing to pay for the right calls.

In that sense it is admirable that the GFA is prepared to face poor refereeing head on but there is something skewed and badly unfair about the present review panel.

There are bad refereeing calls everywhere. If there is anything the past European club football season thought us, it is that there are potentially more bad calls in the so-called big and advanced leagues than they are in the Ghana Premier League.

Sadly here, the work of the match review panel seems to say referees must get it right at all cost. It seems to ignore the human factors in making decisions.

When William Agbovi was suspended for eight matches recently, it was because he had missed a penalty.

'The GFA Executive Committee has approved the Match Review Panel's recommendation to ban Referee William Agbovi for eight (8) competitive matches effective Monday May 16, 2016,' a GFA statement said.  'According to the Review panel's report, Referee Agbovi failed to award a penalty to Wa All Stars against Medeama around the 88th minute of their Ghana Premier League Match day 10 game played in Tarkwa.'

Another referee also got a six match ban for getting a free kick wrong. 'Referee Solomon Mordey and his assistant Michael Asare have also been banned for four (4) and six (6) matches respectively effective May 16, 2016.

It would be interesting to sit through one of those meetings of the match review panel and listen to the rational for some of those decisions. Apparently they watch a video of the games in the comfort of an airconditioned rooms, with remote controls, not once but several times after several rewinds and forwards and conclude on what should have been a foul or not. They do what we do on TV and radio except that this time they have the power to recommend punishment.

In the case of Solomon Mordey part of the evidence that condemned him as guilty was a photo that captured the alleged tackle.

We are effectively banning referees for up to eight weeks by watching videos, photos and concluding what they should have done and not done. We are effectively saying to the referees that what the panel sees with the aid of video, replays, still images, they must see and make judgement on in a split second.

That cannot be right. It cannot be right that we are using video technology to condemn referees to bans when we won't aid them with a similar technology in making the decisions. Agbovi made a decision about a penalty call in less than a minute, a review panel took minutes to make theirs. But look at the definite nature of the statement; 'Referee Agbovi failed to award a penalty.' The statement assumes that there is stonewall path to making decisions in a game. That conclusion also takes away a lot of factors crucially the speed with which a referee must make a call.

Referees are so basterdised that no one seems to find anything wrong with this. Everyone blames their problems on them. The club officials who can't run their clubs well think referees are the beginning and end of their problems, the player who misses four chances believes the one penalty call that didn't go his way is the reason he lost a game and the coach who made the wrong substitute could argue it is a throw in he didn't get that allowed the other team to run down the line and score the equaliser.

They are everyone's favourite villian so there has been a lot of applause at the match review committee's decisions. But there are better ways of doing it. Take referees out of the firing line, demote them to first division games, do anything but don't make statements that backs the idea that referees must not make mistakes at any point.

Senior football officials have consistently told football fans to trust in referees and accept their calls because they are human who need split seconds to make calls. The same hierarchy feels it is okay to sit in nice offices, watch videos and decide that what a referee didn't think was a penalty in a game situation should be a penalty after the benefit of this beautiful technology calls replays.

That thinking has inspired mad football violence in the past. It is inspiring the match review panel now. It is striking the nail into the coffins of referees one sitting at a time. Blinded by our collective dislike for referees, we may not see it now. Long term it would be disastrous.