AshantiGold vrs Wa All Stars- Preview: Struggling champions need a win to get back on track 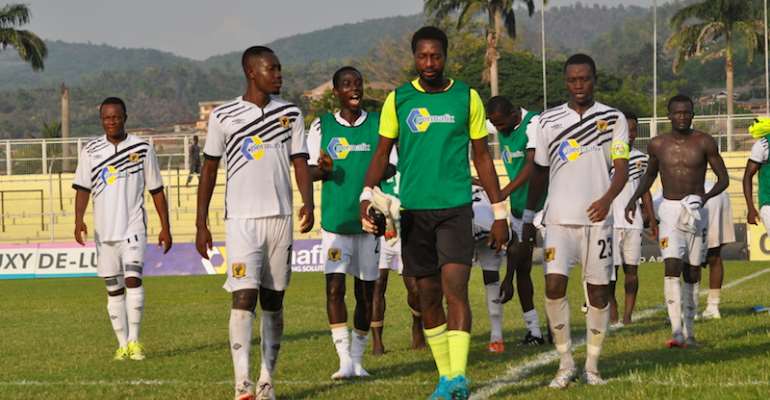 AshantiGold SC will have to overcome Wa All Stars  as they search for a home victory after going winless in their last four matches.

They host Wa All Stars at the Len Clay stadium on Sunday in the Ghana Premier League.

The Miners trekked to Tema to gain one point against Inter Allies FC on Wednesday .

They are one point ahead of the drop on the league table.

Fatau Dauda is expected to keep his place as the number one after a splendid show in the midweek to help Ashanti Gold SC get a draw.

Young winger Paul Abakah Nkrumah has not recovered from his injury which rules him out of the match.

Wa All Stars shared the spoils with WAFA at home after they were held to a 1-1 stalemate in the league last Wednesday at Wa Park.

Wa All Stars make the trip to Obuasi with the absence of defender Issahaku Konda and midfielder Mohammed Awudu Amando.  Both are in the Ghana U20 camp in Ethiopia

Joseph Adjei is still nursing an injury.  He has been out of action for close to a month now.

(W1 D1 L3)
*Ashanti Gold SC are winless in their last five home games in the premiership since winning their opening home fixture.

(W0 D3 L2)
*Wa All Stars have lost all of their last three away matches in the league.

They have won twice at away this campaign.
(W2 D1 L3)
*The Miners have lost just one of their last four premier league matches against Wa All Stars.

(W2 D1 L1)
*Wa All Stars have managed only one victory at away to Ashanti Gold SC in the premiership.

*Wa All Stars have scored in five of their six premier league travels this term.

They have kept just one clean sheet in the process.