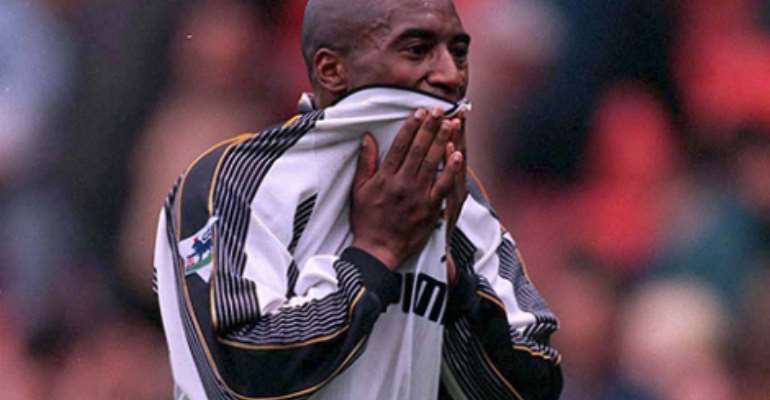 Manchester United suffered a setback to their title hopes when little-known debutant from Costa Rica scored a wonder goal to help Derby County inflict a surprise 3-2 defeat upon them at Old Trafford.

Sitting three points clear at the top of the Barclays Premier League at the start of play there seemed little to fear from a side hovering just four points above the relegation zone, but Alex Ferguson's side were soon on the back foot when Ashley Ward struck midway through the first half.

Dean Sturridge
Things soon got worse for the hosts as Paulo Wanchope, on his Barclays Premier League debut, embarked on a mazy run 10 minutes before the interval that took him past four United players before beating Peter Schmeichel.

It was such an impressive introduction to the English top flight that the goal would later be voted as Derby's best ever by County fans as part of the club's 125th anniversary celebrations.

the visitors had already stretched their lead through Dean Sturridge, who takes up the story:

"Paulo Wanchope had scored a similar goal in training leading up to the game which convinced the manager Jim Smith and his assistant Steve McClaren to put him in the starting lineup for the first time. They knew they had a talent on their hands."

Wanchope goal
"He picked the ball up from the halfway line in a wide right position and I thought he was going to get tackled by the first player, and started drifting towards the centre of the pitch. Then he was faced by a player or two on the edge of the box, and he was very clever in the way he rolled his right foot over the ball to engineer that little bit of space. It was like he was backing away from the goal and nearly falling over but somehow he managed to get the power and the curl to find the far left-hand corner of the net past Schmeichel."

Though a spectacular and unexpected introduction to the Barclays Premier League his goal came as no shock to Sturridge and his team-mates.

"Because we'd seen this sort of thing from him for weeks in training with him it wasn't a major surprise to us Derby players but it made a major impact on the public psyche because suddenly everyone knew what he was capable of.

"He was a very hit-and-miss player, you never knew what he was going to do next, but in terms of individual ability and getting people on the edge of their seats he had fantastic ability. It was one of an array of many brilliant goals he scored for us but that was probably his best

McClaren mastery
Wanchope's wondergoal aside, Sturridge remembers the game for the tactical acumen of Derby coach Steve McClaren in putting one over on the best side in the land. "Apart from Paulo's goal the overriding feeling after that game was the tactical nous of McClaren. He was just coming to people's attention then as a coach and he had a fantastic relationship with Jim Smith.

"The way they worked tactically and the way they worked as a team was fantastic. We played with three attackers and we all scored that day. We all alternated positions to give ourselves a rest because the wide players had to run back a lot and chase to stop United's wide men from playing."

Derby's victory helped the Rams, who had beaten Tottenham Hotspur 4-2 the previous week, finish the season strongly. They would lose just twice more in the run-in - and remain in the top flight - and Sturridge believes the Old Trafford win, which he rates as one of the most memorbable in his career, was the catalyst.

"The fear factor that Man United created because of their history and the quality of their players meant that sometimes they were 1-0 up before they started," he added. "But that United game made us realise we belonged in the Premier League.

"From that victory onwards we started looking ahead and thinking, 'Can we finish in the top 10?' Over those first four or five seasons under McClaren and Jim Smith we were more around the top 10 rather than looking over our shoulders. We had players who were confident in their ability. It was a very special group of players."

United, meanwhile, were able to shrug off the setback, winning their next two away matches, against Blackburn Rovers and Liverpool respectively, before storming to a fourth Barclays Premier League title.

Dean Sturridge now works as a presenter on PLTV.

Soldiers will die more in any order to shoot to kill galamse...
22 minutes ago

We see politicians flaunting cars, houses in less than four ...
43 minutes ago