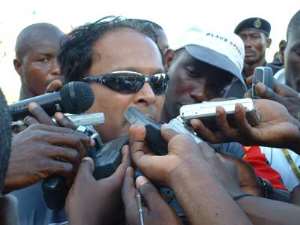 Graphic -- Former Black Stars coach, Mariano Jeronimo Barreto, has declared that Ghana soccer can only move forward if some selfish individuals who parade as lovers of the game are completely weeded out of the system.

He said the stock in trade of these individuals is merely to push their players into the national team with the aim of getting contracts for them to satisfy their personal interests. Barreto who broke his long silence in a telephone interview with the Graphic Sports yesterday since walking out on his Ghanaian job last September only stopped short of mentioning the names of the people involved in this practice.

When pressed further, he promised to narrow it down to the specifics only after the elections since he did not want to fuel the political tension currently prevailing in the country. The Portuguese trainer who now handles his native division one side, Maritiomo, disclosed that though some people tried to interfere with his job during his 10-month stay in Ghana, he stood his grounds to ensure that nothing ing of the sort happened.

“There are many other things happening in Ghana football which I will say at the right time because I still love Ghana. I really like Ghanaians and will come to Ghana one day”, Barreto hinted.

Quite contrary to the general perception among Ghanaians that he breached his two-year contract with the Ghana Football Association (GFA) by flouting the three-month notice clause prior to his resignation, Barreto maintains that he did the best thing by walking out on his job.

According to him, he informed the GFA and some other people about his intention to quit the Stars job after the World Cup qualifier against Cape Verde.

“I sent a fax to the GFA immediately after leaving Ghana to explain to them to accept my resignation since the atmosphere was not conducive for me to continue working there”.

Asked whether FIFA had served him with any summons to pay a $10m as demanded by the GFA, Barreto answered in the negative and assured that he would be willing to narrate his side of the story to the world soccer governing body anytime he is called upon to do so.

“The GFA has the right to go to FIFA, but I think I did the right thing too”.

He explained that though many people from over the world did not understand why he left at a time the team was leading the World Cup group, he still saw the need to go since he thought some people did not want him to work in the country.

“I left a lucrative job at Lokomotiv Moscow and came to Ghana to help after Ben Koufie had convinced me about the prospects in coaching the Stars, but some people didn't want me to continue with the job”, he noted.

“Some media men also insulted me when I was there and others asked me why we didn't beat Cape Verde 4-0 or more in Kumasi. What did those people say when the team drew goalless with DR Congo”? Barreto quizzed.

“Some people told me that everything was okay with Ghana Soccer. But I know everything is not okay”, Barreto said of the current state of Ghana Football. He also denied that he quit because Maritimo enticed him with a better offer.

“For your information, I had many other offers while in Ghana but never considered any”,he revealed.

He would not fault the GFA for what happened to him during his stay here since he thought they had little to do under the circumstance.He,however, did not see why players like Bernard Don Bortey and Sule Muntari should be recalled into the Stars team after they had turned their back on the nation in earlier assignments.

Though he conceded that the task facing the new Stars coach, Ratomir Dujkovic was huge, he was hopeful that he could be successful if only he could check the indiscipline among the playing body, as well as enjoy the support of the FA.

WHO Acknowledges ‘Evidence Emerging’ Of Airborne Spread Of C...
31 minutes ago