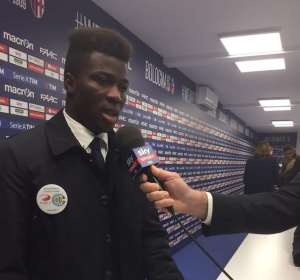 Bologna star Godfred Donsah believes his side enhanced their Serie A survival chances with a hard-fought 1-1 home draw with title chasers Fiorentina.

The Ghanaian midfielder lasted the entire duration and provided the assist which led to the equalizer scored by Emmanuele Giaccherini.

Bologna had to rally to earn a point against the visitors who were reduced to ten men before the hour mark and their opening goal.

"Great game against a very strong team. We defended well in the middle field against quality players such as Borja Valero and Vecino but unfortunately they scored just when they're with one man down,' Donsah said in a post-match interview.

"Then we reacted, finding the goal and having other opportunities to win the game.

"In the end it's a good point that allowed us to come closer to our final goal: be sure to remain in Serie A as soon as possible. Personally I'm happy, Donadoni is motivating me and I feel fine on the pitch."