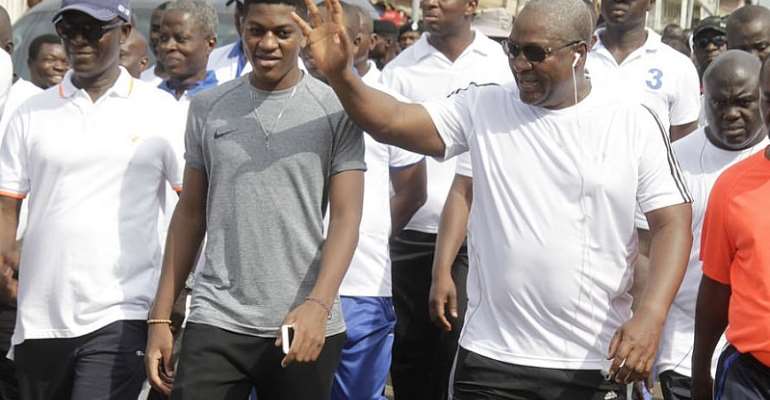 Belgian top-flight side KV Mechelen have finally confirmed that the son of Ghana President John Mahama has arrived at the Pro League side and he is already undergoing training.

With no official statement coming from the club on the arrival of the son of Ghana's leader, there were doubts about the authenticity of the report.

Now a statement by  Mechelen has confirmed that the Sharaf Mahama is among four Ghanaian players training with the Belgian side with the view of landing a deal.

"Additionally we have the named of Hope Doagbodzi and Mahama Sharaf. Both players have been with the youth side," the statement said when commenting about the son of Ghana's leader.

This comes just eight months after Sharaf Mahama announced his decision to pursue his career in football after playing in Stephen Appiah's testimonial in June last year.

Sharaf Mahama played as a second half substitute in the game which was also played by Africa's top stars including Emmanuel Adebayor, Asamoah Gyan and Andre Ayew but did not have enough playing time to demonstrate his prowess.

He arrived in the country along with his compatriot Hope Doagbodzi who have been training with the side in their bid to grab a permanent deal.

The information also claims that two other Ghanain youngster Rueben Acquah and Opoku Ampomah were also signed by Mechelen who previously had Ghanaian defender Nana Asare as their captain.

Abdul-Yakuni Iddi (and his brother) both from Ghana also played for Mechelen in the past.

Sharaf Mahama is already popular with footballers in Ghana as he is close friends with Andre Ayew, Jordan Ayew, Asamoah Gyan and Stephen Appiah.

He is a football and fitness addict who has joined his father in public fitness activities in recent times.

While studying in Dubai, he regularly attended matches of Ghana captain Asamoah Gyan when he was the star striker of Al Ain in the UAE top-flight league.

The 18-year-old is determined to play professional football and see the move to Belgium as a springboard his career.

Sharaf was trained by Ghana legend and three-time African Footballer of the Year Abedi Pele who coaches his second-tier side Nania FC.