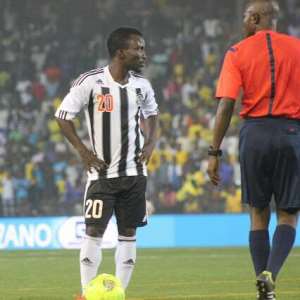 Ghanaian tricky winger Solomon Asante is delighted with his form after he recovered from a troublesome thigh problem he picked up on international duty.

The 25-year-old Ghana international has returned to full scale action having featured in his sides last two games.

Asante's return has coincided with his clubs return to form with all the two games he has played in being comprehensive victories.

The former Berekum Chelsea forward who was linked with a lucrative move to AEK Athens says he is just delighted to have returned to football without pain.

'I am really happy that I am able to play football again without pain,' Asante told GHANAsoccernet.com

'There were a lot of things that were written about me in the transfer window but I will hold my brief and talk about it at the right.'

'As a footballer I know there are challenges but at the right time everything will be told."

'I am just happy that I am back playing and doing my very best for the team.'

The Ghanaian in his three year stay with TP Mazembe has won the Congolese cup, the CAF Champions League medal and a CAF Confederation cup runner up medal.