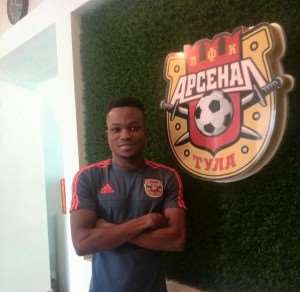 
Russian side Arsenal Tula have confirmed the signing of Ghanaian defender Richmond Nketiah on a two-year deal with an option to extend for a further year.

The talented right-back joins from Latvian side FK Spartaks JÅ«rmala.

Nketiah has been training with the Russian outfit for more than two months.

The former Medeama ace has finally put pen-to-paper to begin his career with the European outfit.

The highly-rated defender was a member of Ghana's Under-20 that won bronze at the 2013 World Youth Championship in Turkey.

The Ghanaian youngster provides good delivery from the flank and shows composure on the ball.

He is highly-rated as he typifies solidity coupled with well-balanced traits.