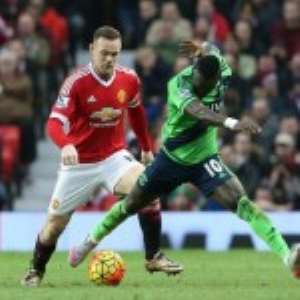 Manchester United ‘s hopes of mounting a serious Premier League title challenge were damaged as Charlie Austin scored on his Southampton debut to earn a 1-0 win at Old Trafford on Saturday.

Cameron Borthwick-Jackson was the only change from the XI which won at Anfield, and Van Gaal’s side again started slowly with few chances to speak of in another forgettable first half for Old Trafford supporters.

Liverpool snatched a 5-4 victory at Norwich City thanks to an Adam Lallana winner deep into injury time.

Roberto Firmino had made the breakthrough on 18 minutes, but Norwich drew level just before the half-hour mark when Dieumerci Mbokani sent a superb backheel past Simon Mignolet in the Liverpool goal.

Steven Naismith, who joined Norwich from Everton this week, then fired home from a difficult angle to mark his debut with a goal.

Norwich City 4-5 Liverpool FT
Norwich extended their advantage on 54 minutes through a Wes Hoolahan penalty, but Jordan Henderson swept home 96 seconds later and Firmino made it 3-3 with just over an hour gone.

Norwich’s Russell Martin then played a sloppy backpass to allow James Milner to run clean through and slot past Rudd to make it 4-3 on 75 minutes only for Sebastien Bassong to fire home an equaliser in injury time.

Yet Lallana would have the last word, bouncing a shot past Declan Rudd in the final seconds of the game to spark wild celebrations.

Leicester City moved three points clear at the top of the Premier League with a 3-0 win over Stoke City .

Leicester took the lead two minutes before half-time with a 20-yard half-volley from Danny Drinkwater.

Leicester City 3-0 Stoke City FT
Jamie Vardy then netted for the first time since Dec. 14, latching on to a Drinkwater throughball before stylishly putting away his 16th goal of the season.

Leicester wrapped up the victory when Riyad Mahrez set up substitute Leonardo Ulloa.

The result sees the Foxes, who had trailed Arsenal on goal difference at the start of the day, go clear at the top ahead of the Gunners’ game against Chelsea on Sunday.

.
Tottenham Hotspur came from behind to beat Crystal Palace   3-1 at Selhurst Park as Dele Alli scored a stunning late goal.

Palace — who had not scored a league goal since Dec. 19 — took the lead when Jan Vertonghen diverted the ball into his own net from a Wilfried Zaha cross.

Palace, on a run of three straight defeats going into the game, nearly restored their advantage with 10 minutes to play but both Scott Dann and Mile Jedinak struck the woodwork in quick succession following a free kick.

Their failure to score was to prove costly as Alli controlled the ball, flicked it over Jedinak’s head and then volleyed past Wayne Hennessey in the Palace goal.

Chadli then curled home a third late on to ensure victory.

Watford ended a four-game losing streak with a 2-1 win against Newcastle United .

Odion Ighalo opened the scoring just 44 seconds into the second half, with Troy Deeney dinking the ball over the defence before the Nigeria international took the ball around keeper Rob Elliot to slot home.

However, Jamaal Lascelles scored with a header from a Jonjo Shelvey corner on 71 minutes

West Bromwich Albion and Aston Villa played out a goalless draw in the West Midlands derby.

West Bromwich Albion 0-0 Aston Villa FT
Villa were denied an early penalty when Jordan Ayew went down under a Jonas Olsson challenge, but referee Robert Madley waved away the appeals.

Sunderland and Bournemouth   drew 1-1 in their relegation battle at the Stadium of Light.

Sunderland 1-1 AFC Bournemouth FT
Benik Afobe opened the scoring on 13 minutes with a fine header from Junior Stanislas’ cross, but Sunderland were level on the stroke of half-time through Patrick van Aanholt’s left-footed strike.