Amankwah and others nominated for Athlete of the Year Award 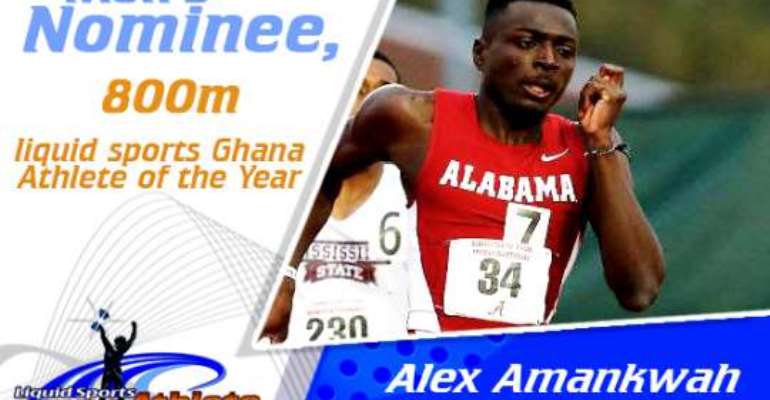 Accra, Jan. 22, GNA - Ghana's only qualifier for the Rio 2016 Olympic Games, 800m runner Alex Amankwah and others have been nominated for the inaugural Liquid Sports Ghana Athlete of the Year Award to be announced on Friday, January 29.

The award is aimed at promoting the sport by throwing the spot light on national athletes who have excelled in representing the country both locally and internationally.

The list is dominated by athletes who helped Team Ghana win an impressive eight medals in Athletics at the 2015 All African Games (AAG) in Congo-Brazzaville.

According to the organizers of the award, the nominees for the inaugural awards were determined using the IAAF's Scoring Tables of Athletics, the athletes who won medals at the 2015 All Africa Games and 2015 Commonwealth Youth Games (CYG), World and African rankings, and the athletes who broke a national record.

Amankwah who capped a stellar season by becoming the first Ghanaian athlete to qualify for Rio 2016, having run a personal best 1:45.93 will battle it out with John Ampomah, Atsu Nyamadi, Jordan Yamoah among others for the award.

Also making the short list are Emmanuel Dasor, Daniel Gyasi, George Effah, Solomon Afful, Sprinter Tim Abeyie and long jumper Richard Seklorwu, who made history by becoming the first Ghanaian to win a gold medal at the Commonwealth Youth Games, after winning the boy's long jump with 7.67m made the top 10 list.

The list includes three of the women's 4x100m silver medal winning team including Gemma Acheampong and Flings Owusu Agyapong. The rest are young sprint sensation Suzie Acolatse, ranked 19th in the 100m and 23rd in the 200m in Africa respectively, Lydia Mato, triple jumper Mathilde Boateng , Heptathlon queen Elizabeth Dadzie is among the top athletes after achieving 5144pts in the season and ranked 10th in Africa.

The award will be voted for by a panel made up of local and international journalists, athletes and coaches.

Seized rosewood to be used for National Cathedral constructi...
15 minutes ago

Anti-LGBTQ bill gazetted, to be laid for first reading on Mo...
20 minutes ago