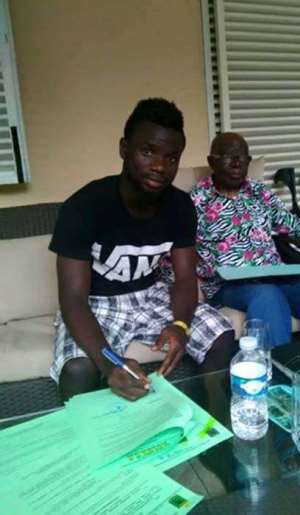 Congolese top-flight side, AS Vita has gazumped Indian premier league side, Delhi Dynamos for the signature of Ashgold's Bernard Morrison.

Bernard Morrsion who joined Ashgold from Heart of Lions two seasons ago was scheduled to undergo Delhi Dynamos medicals after the two teams [Ashgold and Delhi Dynamos] reached an agreement for the Local Black Stars star man.

But the Congolese side came in and offered a mouthwatering transfer figure to outbid Roberto Carlos' side as Bernard Morrison has officially inked a three year deal with Kinshasha based club worth $100,000.

'I'm now AS Vita player I have signed a three year deal with them and I'm ready to play my first, initially I was heading to India but Vita came with a good offer which I can't turn them down,' Morrison exclusively told Allsports.com.gh.

Bernard Morrison has been one of the best players for Ashgold this season scoring 6 goals in 21 league games and the Obuasi based club are on the verge of becoming champions in Ghana for the first time in 19 years.