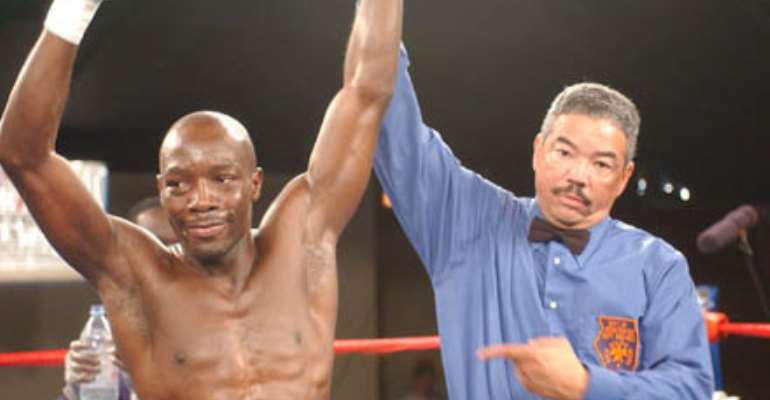 I first remember hearing about Jr. Middleweight contender and then Welterweight prospect Kofi Jantuah back around late 1998. I was told he was an Accra, Ghana fighter somewhat in the mold of an Ike Quartey, with a lot of physical strength and an iron jab leading his attack. I kept tabs on him and was anxious when he was scheduled to meet Santiago Samaniego in early 1999 on FoxSports. Samaniego is best described as a solid Panamanian trial horse who often gets caught up in heated action, so I expected to see several facets of Jantuah's game come into play.

Needless to say I wasn't disappointed as Jantuah and Samaniego delivered all kinds of fireworks. Jantuah started strong early on and bullied his foe around the ring with a two fisted attack. Samaniego was game and the rounds were close but it was obvious who was in charge. Jantuah's jab didn't seem as great as I was told, but it was still a useful weapon throughout the contest. Late in the fight Samaniego dug in with some hard body shots that appeared to take Jantuah's wind, but he fought on and appeared to recover. The action was fierce as the contest came to a close but I was pretty certain that Jantuah had done enough to win. The judges' cards were read and Kofi came away with the win over 10 rounds.

I was impressed most by Jantuah's heart and grit, more so than his skill, and I was eager to see him again. Four months later he landed a date on ESPN2 against tricky southpaw Daniel Santos.

Currently the WBO Junior Middleweight champion, Santos is currently riding the waves of a split decision victory over highly regarded challenger at 154 lbs. Antonio Margarito just a week ago, but go back to 1999 and Santos was just a name amongst names in the fight game.

Santos tried to offset Jantuah by moving around the ring but it was apparent that Kofi's pressure was going to play a key in this fight. The early rounds were close but Jantuah started to gain the edge. Bit by bit he seized the momentum and in the 5th round he clocked Santos with a dandy of a punch, dropping the Puerto Rican. Santos was a bit shaken but he got up and appeared fit to continue. However, referee Jay Nady would see otherwise as he looked into his eyes and waived the bout off. Jantuah was awarded a 5th round TKO win and was carried into the air, barking loudly with excitement. (Note: The fight appeared to be stopped prematurely as Nady might have been better off letting Santos go on. The stoppage resembles the Corrales-Gainer stoppage, also done by Nady, which many claimed to be premature. I believe Nady is a competent referee, it's just that these two fights are strikingly similar).

After this bout I expected Jantuah to make some more noise but he then suffered a bit of inactivity and appeared to slip under the radar. I saw his record and the W's continued to come in but he wasn't getting any exposure and began fighting only once or twice a year. The next I remember hearing of Jantuah was a June 2001 meeting with Manuel Gomez, in which he built up a lead only to be knocked out late in the fight. When I heard the news I didn't know what to think, and only hoped Jantuah would someday bounce back.

Fast forward 3 years and 6 straight victories, and under the tutelage of new trainer Jeff Mayweather it appeared that Jantuah was headed in the right direction. Which brings us to where we are today, with Jantuah most recently being seen delivering a highlight reel knockout over undefeated Marco Antonio Rubio underneath the Bernard Hopkins-Oscar de la Hoya showdown last weekend. It was a brutal left hook from Jantuah that did the trick in just 33 seconds and opened up a lot of eyes. Rubio may not be world class, but it was quite a statement by Mr. Jantuah to finish his foe in such fashion.

In boxing I always hate to see young fighters disappear after suffering early defeats. Some prospects bite the dust early on and are either never the same or they vanish completely soon afterwards. Jantuah suffered an early career loss, but he has stayed strong and battled back, now knocking on the Jr. Middleweight division's door. Where his career goes from here is yet to be seen, but all I have to say for now is…Welcome back Kofi