Today in history: Italy win the FIFA World Cup back to back 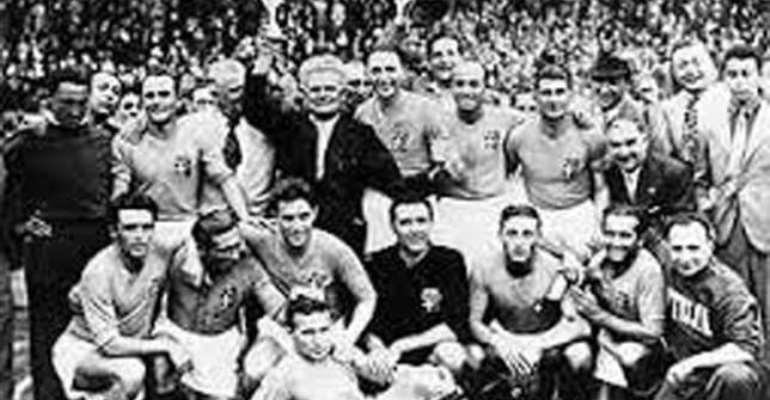 On 19 June 1938, Italy became the first nation to win consecutive World Cup titles by beating Hungary 4-2 in that year's Final. It was a relief for many people who believed the Italian players had received death threats from Benito Mussolini should they lose.

Italy, who had won the previous tournament by beating Czechoslovakia 2-1 in Rome, fielded a very different side in the 1938 Final. Of the 11 players who beat the Czechs, forward Giuseppe Meazza was the only returning starter, but he was joined again by manager Vittorio Pozzo. The Azzurri advanced to the title by virtue of their strong defense, conceding no more than one goal in each of their previous matches, with wins over Norway (2-1, aet), hosts France (3-1), and Brazil (2-1). The win over Brazil was particularly impressive, as the Italians shut down the tournament's leading scorer, forward LeÃ´nidas da Silva, who scored in every other match for Brazil.

In the Final, played before a crowd of 60,000 at the Stade Olympique de Colombes in Paris, the Azzurri again held their opponents' leading scorer - forward Gyula ZsengellÃ©r - without a goal. ZsengellÃ©r had found the net six times in Hungary's wins over the Dutch East Indies (6-0), Switzerland (2-0), and Sweden (5-1), but was continually frustrated in the Final. Italy took a 3-1 lead by the break thanks to goals from forwards Gino Colaussi (6', 35') and Silvio Piola (16'). Piola scored another in the 82nd minute to seal the 4-2 win. Afterward, Hungarian keeper Antal Szabo said "I may have let in four goals, but at least I saved their lives."

As it turned out, Mussolini had sent telegrams to the players saying "Vincere o morire!" But while the literal translation is "win or die," it was in reality a common Italian phrase of encouragement that simply meant "do your best."

Mahama becoming President again is one of the greatest calam...
19 minutes ago

What Shatta Wale did was childish and stupid — Nii Ayitey An...
27 minutes ago