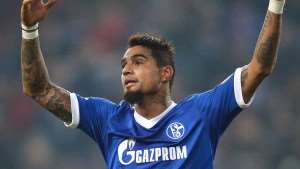 There will be no way back for suspended midfielder Kevin-Prince Boateng nor forward Sidney Sam at Schalke next season, even under new coach Andre Breitenreiter.

The pair were suspended indefinitely heading into the final few games of the Bundesliga season due to indiscipline and the club’s director of sport Horst Heldt, speaking at a press conference on Monday, insisted his club’s stance would not be changing.

“We are sticking with what we have decided, that we do not want to work with either of them next season,” Heldt said.

The director was speaking at the presentation of new coach Breitenreiter, who spoke of his pride in taking charge of one of Germany’s biggest clubs.

“My first impressions from recent weeks have been confirmed again here today,” he said. “I am so proud to be coaching a club like Schalke. It’s a huge challenge for me.”

It is a challenge Breitenreiter hopes to succeed in, although he did not want to set out his stall for a top-four finish at the end of his first season in charge, saying the priority is “to show that we are united again — on and off the field.”

However, he added at the same time that it would not be a surprise if he does lead the Royal Blues back into the Champions League next season.

“I’m sure it’s not too big a step or too early for us,” he said. “Schalke are a top club in Germany and also in Europe.

“Of course a top-10 finish in the upper regions of the league will nevertheless be expected. I’m ready for this challenge, but I know also that it will only work if we are a top team.”

The former Paderborn coach will be able to count on Benedikt Howedes in that undertaking with Heldt confirming the Germany international will not be seeking a transfer this summer.

“I spoke to him on the phone again yesterday and he has opted for Schalke,” Heldt said. “He had some offers from some of Europe’s most illustrious clubs so we’re delighted that Benedikt has decided to carry on working for Schalke.”