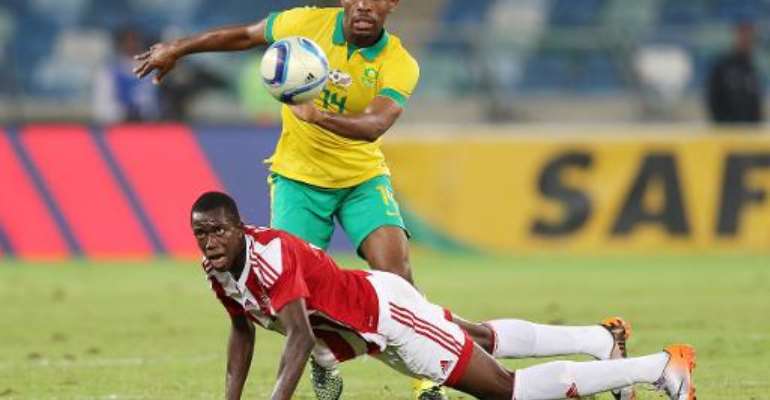 Thulani Hlatshwayo of South Africa challenges Assan Ceesay of Gambia (on the ground) during their Group M, 2017 Africa Cup of Nations qualifying football match on June 13, 2015 in Durban. By Anesh Debiky (AFP)

Johannesburg (AFP) - Nigeria made a winning start, Zimbabwe created an upset, and South Africa and Zambia were held at home as Africa Cup of Nations matchday 1 qualifying continued Saturday.

Cape Verde scored seven goals and Angola four against weak rivals in other games as the contest to find 15 teams for the 2017 finals in Gabon unfolded.

A disastrous start to the last qualifying competition robbed then defending champions Nigeria of a place in the 2015 tournament won by Ivory Coast.

But the 'Super Eagles' patiently wore down dogged minnows Chad in northern city Kaduna for a 2-0 Group G victory.

Gbolahan Salami broke the deadlock on 63 minutes and Odion Ighalo converted a penalty 10 minutes from time to complete a routine victory.

Chadian hopes were not helped by a bonuses row that delayed departing from France and the late arrival of team luggage, including training kit.

Zimbabwe, who missed a flight to Malawi and travelled by bus via Zambia, won 2-1 in Blantyre thanks to a Khama Billiat cross-cum-shot that slipped into the far corner of the net.

Cuthbert Malajila punished a Harry Nyirenda blunder to put the visitors ahead midway through the opening half only for John Banda to equalise within 60 seconds.

The absence of honeymooning Tokelo Rantie left South Africa without a recognised striker and they paid the price as minnows Gambia forced a 0-0 draw in Durban.

It was the usual Bafana Bafana (The Boys) tale with lots of possession going to waste through unimaginative final-third play.

Cape Verde, seeking a third consecutive Cup of Nations appearance, showed why they are ranked 150 places above fellow island state Sao Tome e Principe with a 7-1 triumph in Praia.

Gelson bagged a brace as Angola trounced the Central African Republic 4-0 in Lubango, where Dolly Menga and Gilberto converted penalties in a Group B mismatch.

English Premier League sharp-shooters Mame Biram Diouf and Sadio Mane were among the goals as Senegal opened their Group K campaign by overcoming Burundi 3-1 in Dakar.

Algeria, the top-ranked African team, scored twice in each half for a 4-0 win over lowly visitors Seychelles in Group J with El-Arbi Hillel Soudani claiming two goals.

Another 11 qualifiers will be played Sunday while Ivory Coast have a bye and face Gabon in a Libreville friendly.

I can’t blame my visa denial to Netherlands on anti-LGBTQ+ a...
59 minutes ago