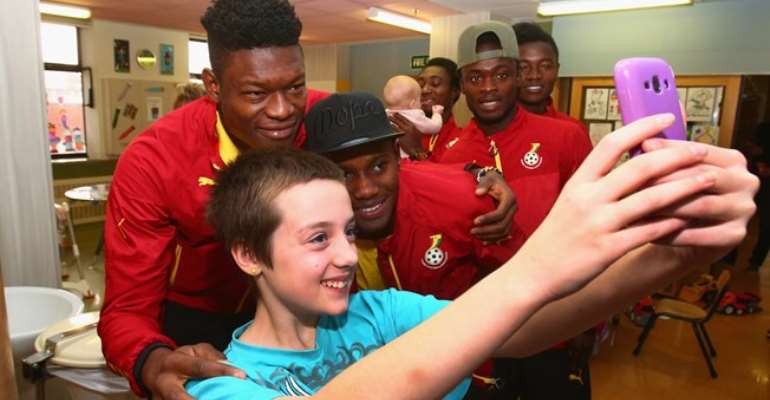 Ahead of their last 16 match against Mali at the FIFA U-20 World Cup 2015, Ghana's team visited the Children's Hospital Wellington, the first and oldest of its kind in New Zealand. The patients were astonished when the curtain was suddenly drawn back to reveal five tall, athletic young men in red tracksuits.

Admittedly, Mutawakilu Seidu, Joseph Bempah, Kingsley Fobi, David Atanga and Barnes Osei had to introduce themselves to most of the children and explain who they are - but is that really any surprise in a rugby-mad country like New Zealand?

Nevertheless, when the Black Satellites conjured a couple of souvenirs from a gift bag, the kids soon got excited and even forgave the newcomers for interrupting their TV programme. Despite being a little shy at first, it was not long before these bright-eyed children began trying on headbands and armbands in Ghana's national colours or putting them on their favourite stuffed toys, before enjoying a game of tic-tac-toe with the young African stars.

'When I heard that we were planning to visit a children's hospital, I said yes straight away,' Atanga told FIFA.com. 'I think it's a good thing and I'm doing it with all my heart. I'm very grateful to God for blessing me with good health as I know it's something we shouldn't take for granted. Unfortunately my sister was not as lucky as me, so I just want to bring these kids a little happiness,' he concluded. 'And what's better than making a child laugh?' added Seidu.

Ghana's newest fans were then invited by the Local Organising Committee (LOC) to attend the Round of 16 match at Wellington's Regional Stadium with their parents. Twelve children and young people happily accepted the invitation and crossed their fingers for their new 'favourite team' - with one small caveat.

'I hope Ghana can win, but if they meet New Zealand later on… well, then of course I'll be cheering for the All Whites,' said Petra, who has watched almost all the U-20 World Cup games on television so far and was clearly delighted at the prospect of visiting the stadium.

Jacob, whose favourite player Alex Rufer is also in the New Zealand ranks, is another patient who has barely missed a moment of the tournament. 'I'm a winger,' he explained. 'I hope I'll be better again as soon as possible so I can go back to playing football every Saturday and Sunday like I did before. I really miss it.'

Although Ghana were ultimately forced to make way for Mali in their battle to reach the quarter-finals, this was a wonderful and exemplary gesture by a group of polite and patient young footballers who devoted plenty of time to their visit.

The children's hospital's volunteer manager Trish Lee agreed wholeheartedly: 'It was a great thing and the kids really enjoyed it. We're always extremely grateful to be able to offer our young patients such an entertaining diversion.'

Be strong — Isaac Adongo consoles Bawumia with a cow for mot...
53 minutes ago