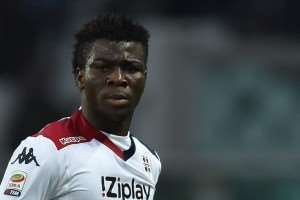 By Patrick Akoto
GHANAsoccernet.com can exclusively report that Cagliari youngster Godfred Donsah is struggling to acquire a visa for this month’s FIFA U20 World Cup in New Zealand.

The situation according to GHANAsoccernet.com sources has left the player in disarray as he is eager to join his colleagues in camp ahead of the start of the 2015 World Youth Championship.

With barely 12 days left for the start of the tournament, Donsah has been hit with a visa hitch, frustrating his eagerness to represent his native country.

The Ghana FA is desperate to see the player sort out his visa problems as he is seen one of the exciting talents to lead the country to a second world title.

There have been assurances that the highly talented midfielder will get the document just in time before Sellas Tetteh names his final 21-man squad for the tournament .

Donsah has had a fabulous season in Italy and has been linked with a move away from relegated Cagliari and his potential absence will be a massive blow to the West Africans.