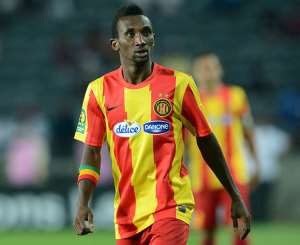 Hearts of Oak were left with a steep mountain to climb in the CAF Confederation Cup as they were thrashed 4-0 by Esperance in a game that saw Ghanaian defender Harrison Afful also get on the scoresheet.

The Phobians looked very nervy in the opening minutes of the game – committing several blunders in their half of the pitch with misplaced passes and the Tunsian giants took full advantage.

Goalkeeper Abdoulaye Soulama was on these several occasions on hand to prevent an early concession.

The impressive Burkina Faso goalkeeper however couldn't stop the opening strike by Samuel Eduok who outmuscled Robin Gnagne off the ball before tapping in in the 12th minute.

The shell-shocked Phobians now had to come out fighting but still couldn't find their rhythm with their passing as the Tunisians kept running at the fragile Hearts defence.

Samuel Eduok should have scored his second midway through the half but miscued a lovely cut-back by Harrison Afful – who was deployed in midfield – for Soulama to pick up the loose ball.

Hearts finally got their break when Isaac Mensah was played in-behind the Esperance defence but the swift winger was flagged offside.

Foovi Aguidi had a glorious opportunity to draw Hearts level two minutes into the second half after a cross met him in space.

His resultant header was however too feeble to trouble goalkeeper Ben Cherifia.

Hearts almost suffered from that miss as Samuel Eduok profited from an over the top ball in a counter move but the Nigerian striker blasted wide at close range with only on-rushing goalkeeper Soulama to beat.

The Phobians were growing in confidence but this was deflated in the 58th minute when Samuel Eduok grabbed his brace with a neat finish.

Harrison Afful then made it three for the hosts with a strike that took a deflection on its way in.

The Ghanaian defender refused to celebrate his goal.

Ghilane Chaalali then made it four for Esperance with 10 minutes left to play.

The resounding result thus means Hearts must win by the same margin or even better in the return leg in Accra to progress to the group stage of the competition.

Free SHS Graduates Gather To Campaign For NPP
11 minutes ago