Have your say: Did the presence of Boateng, Muntari and Essien wreck Ghana's 2014 World Cup campaign? 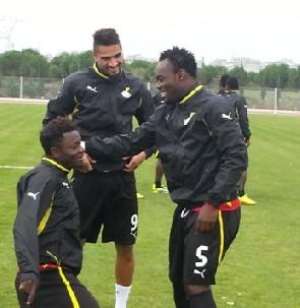 Ghana bundled out of the 2014 FIFA World Cup at the group phase and the country's wrecked campaign has been largely attributed to the inclusion of experienced trio – Sulley Muntari, Kevin-Prince Boateng and Michael Essien.

Kevin Boateng, who has been sacked (now confirmed indefinite suspension) by Schalke 04 only got a chance into the team after playing in the last World Cup qualifying match against Egypt.

He has temporarily called time on his international career claiming combining the physical demands for playing for both club and country was taking a toll on his health.

Essien, who plays for Italian side AC Milan, only got a chance into the team following a public outcry.

Muntari's talent has never been in doubt but his temperament has affected his rather fine career.

He was sacked from the team's camp for punching a Ghana FA Executive Committee member during the ill-fated campaign in Brazil while Boateng was sacked for his reported verbal assault on former coach Kwesi Appiah.

Essien refused to warm-up for the country's final group game against Portugal.

The three players, who are now at the twilight of their careers,  have suffered greatly at club level, struggling to command regular playing time at their respective clubs.

Essien and Muntari will be released by AC Milan at the end of the season while Boateng is now on a lookout for a new club after he was released by Schalke.

Ghana excelled heavily without the three players during the 2015 Africa Cup of Nations where the team managed a silver-winning feat in Equatorial Guinea.

Did the presence of Boateng, Muntari and Essien wreck Ghana’s World Cup campaign considering the fact that the team excelled without them at the Nations Cup?

Should Ghana close the chapter on the three players going forward or are they still needed in the Black Stars?

Please make your views known in the box below.