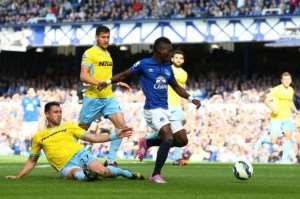 Christian Atsu believes his performances during the Africa Cup of Nations can boost his chances of making his mark in the Premier League, whether that's with Everton or Chelsea.

Atsu, 23, has endured a frustrating season, having played just 71 minutes of Premier League football since joining Everton on loan from Chelsea last summer.

But he says the experience has made him mentally stronger and hopes his eye-catching displays at the Afcon will prompt Everton manager Roberto Martinez to give him more opportunities.

“I was very happy to win the awards and with my determination in the tournament,” Atsu told  Goal . “It gives me great confidence now to play for Everton and prove what I can do.

“Being the best player in the Afcon doesn't mean I can come straight back and start for Everton because we have many great players in my position.

“I believe I can be a success in the Premier League, whether that's with Everton or Chelsea. I have been frustrated, but I always look to the future and I am improving at Everton even when I'm not playing.

“I want to be a better footballer and I am learning from a great coach who trusts young players. I think I'm a very fast winger, I'm skilful and I can create chances for my strikers.”

Atsu cost Chelsea £3.5 million when he signed from Porto in 2013 and impressed last season during a loan spell at Vitesse.

The Blues signed another winger in the January transfer window in Juan Cuadrado, but Atsu refused to be drawn on his future at Stamford Bridge.

“I don't want to say anything about my future with Chelsea, I am just focused on Everton and the immediate future.

“But I believe in myself.  I have never looked down, I stay focused and ready to meet any situation in football or life.”