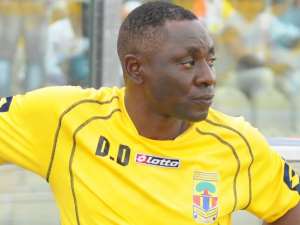 Former Hearts of Oak coach, David Duncan is in fore front to replace Didi Dramani at Asante Kotoko as closed source confirmed talks between the defending league champions and the former Black Starlet coach to  Allsports.com.gh .

On Monday, the Kumasi based club officially handed over an accumulated 4 months leave letter to the CAF coach instructor [Didi Dramani] which is clear that he will not return to the club after his leave.

Didi Dramani won two league titles for the Porcupine Warriors, however in the past weeks he has been hugely criticized for his poor tactical display  in the ongoing season as in 7 league games, he has won 2, draw 2 and lost 3 picking 8 points and 10th on the log sheet.

Before Didi's dismissal Allsports.com.gh  broke the news that, David Duncan is in secret talks with Asante Kotoko to take over the club's coaching job.

However, barely 24 hours into Didi Dramani's dismissal, a close source from the camp of David Duncan revealed to  Allsports.com.gh  that the former Hearts of Oak trainer is in advance talks with Asante Kotoko and he is very close in sealing the deal.

'It is true, Kotoko made a contact to David Duncan for him to come and take the coaching job of their club, I can confirmed that the call came before Didi Dramani was asked to proceed on leave, so David Duncan is in advance talks with them and he is close in sealing the deal,' the source revealed.