AFCON 2015: Reaching the AFCON final is as important as reaching the UEFA Champions league final-Avram Grant 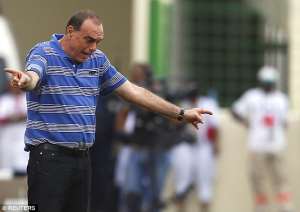 By Rahman Osman
Follow on twitter @iamrahmanosman
Ghana Coach Avram Grant, says reaching the final of the Africa cup of nations is as important to him as reaching the UEFA champions league final.

The former Chelsea boss took charge of the West African giants three weeks to CAF'S flagship competition but has managed to reach the final of the competition.

Ghana will however face a stern test from Ivory Coast in their bid to be crowned African Champions.

Quizzed on which achievement stood high Grant was quick to acknowledge both had equal importance.

“I have been lucky to coach some of the best players in the world. I have been in finals and won trophies in Serbia and Israel,” Grant said ahead of Sunday's finals

“For me I do not rate any final as the best it's a good achievement we have reached with these guys and all Ghanaians should get behind the team.”

This AFCON Update on Ghanasoccernet.com is brought to you by Unibank, caring for you