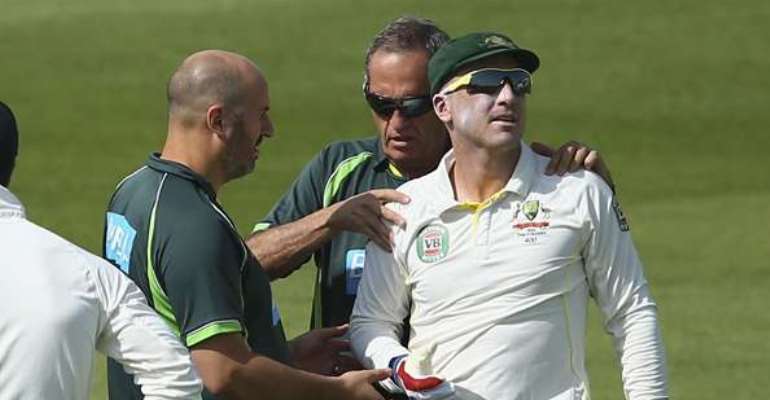 Haddin popped his right arm out of its socket when diving for an attempted catch early on the second day of the Test but despite being in obvious discomfort, the 37-year-old stayed on the field and confirmed afterwards he will play out the rest of the match.

At his media conference following Friday's action - where Pakistan had batted themselves into a dominant position, declaring at 570-6 - Haddin was not interested in getting his shoulder checked.

"I'll know more tomorrow. I can't really give much [insight] now...there's no way I'm going for a scan because it only rules you out," he said.

Pakistan declared late on day two and managed to make an early breakthrough in the 5.2 overs they bowled to Australia, with wicketkeeper Sarfraz Ahmed claiming an edge off Imran Khan's bowling to dismiss Chris Rogers for five.

David Warner and nightwatchman Nathan Lyon steered Australia to 22-1 before the umpires stopped play due to poor light in Abu Dhabi.

While Haddin claimed he was "proud" of how Australia battled through the first two days of the Test, as Azhar Ali (109), Younis Khan (213) and Misbah-ul-Haq (101) all made centuries for the hosts, the veteran gloveman conceded the tourists are in a tough position to save the three-match series.

Pakistan won the first Test in Dubai by 221 runs.
"They're in a very good position...they can dictate how they want to play the next couple of days," Haddin said.

"It's up to us to dig in and it's our turn to bat now, so we've got to make sure we're as hungry as their batters were and get a big score on the board."