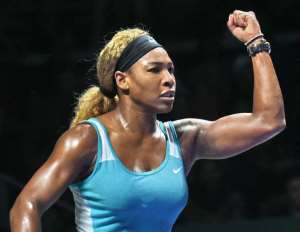 Only in the last four thanks to Ana Ivanovic dropping a set against Simona Halep on Friday, the world number one took full advantage of her reprieve, but had to show incredible resolve to triumph 2-6 6-3 7-6 (8-6) in Singapore.

Williams produced 41 unforced errors, although other aspects of her game - most notably firing down 12 aces - enabled her to get the better of close friend Wozniacki, who successfully served to stay in the match in the decider to force a tie-break.

Wozniacki looked in control in the tie break at 4-1, only for Williams to respond with five successive points before converting match point at the third time of asking.

Defeat will come as a crushing blow for the Dane, but she can at least reflect on a fantastic week in which she beat Maria Sharapova and Petra Kvitova - second and third in the world respectively - as well as Agnieszka Radwanska to breeze through the group stage.

A first victory over Williams in over two years did look possible when Wozniacki made a storming start to take the first set, with her American opponent's frustrations plain to see as she destroyed her racquet at 5-2 down.

Wozniacki held to love to begin the second set, but Williams gradually appeared more energetic on the court, particularly on serve.

Williams levelled the match as Wozniacki's second serve at break point trailing 5-3 was ruled as a fault, with a challenge proving unsuccessful.

The decider went with serve until Wozniacki broke to edge 5-4 ahead thanks to a delicate chip that Williams could only return into the net.

Serving for the match, Wozniacki saw her big chance go begging as Williams' momentum saw the semi-final swing back her way.

Quick hands at the net allowed Wozniacki to save match point at 6-5 down and force a tie-break that she initially dominated, although she was given a helping hand as Williams double faulted to fall 4-1 down.

However, the 33-year-old showed all her trademark steely determination in snatching victory from the jaws of defeat to reach the final for a third year in a row.