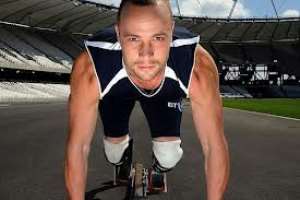 Oscar Pistorius has been sentenced to five years in prison for killing his girlfriend after one of the most sensational murder trials in South Africa's history.

The Olympic and Paralympic runner was convicted of culpable homicide last month for shooting dead 29-year-old law graduate and model Reeva Steenkamp at his home in Pretoria in February 2013.

Judge Thokozile Masipa cleared Pistorius of the more serious charge of murder, saying prosecutors had failed to prove his intent to kill when he fired four 9mm rounds through the door of a toilet cubicle in what he said was the mistaken belief an intruder was lurking behind it.

State prosecutor Gerrie Nel said at the sentencing hearing last week that only 10 years imprisonment would satisfy the South African public. They would lose their faith in the justice system if Pistorius avoids jail, Nel said.

Defence lawyer Barry Roux said, however, that the double-amputee sprinter should be given community service because his sorrow and regret at being killing the woman he loved was the worst punishment of all.

He also said Pistorius, whose lower legs were amputated as a baby, would face particular difficulties in prison.

The 27-year-old sprinter, known as 'Blade Runner' because of the carbon-fibre prosthetics he made famous at the London 2012 Olympics, could also be given a suspended sentence or house arrest.

The six-month trial captivated South Africans and many people around the world who admired Pistorius as a symbol of triumph over physical adversity. With its glamorous victim, tears and tragedy, and Pistorius' fall from grace, it has been endlessly discussed.

It also highlighted the country's endemic violence - in domestic situations in which women suffer abuse from their partners, and also in its high crime rate. The claim that Pistorius feared his home had been invaded struck a chord with some South Africans.

Pistorius' sister Aimee said on Monday the shooting and trial had been damaging for everyone.

"The guilt and ridicule that surrounds it as well as the exposure...and just the heartache for both my brother, my family and of course the Steenkamp family," she told South Africa's ENCA television. Follow @thedonplato