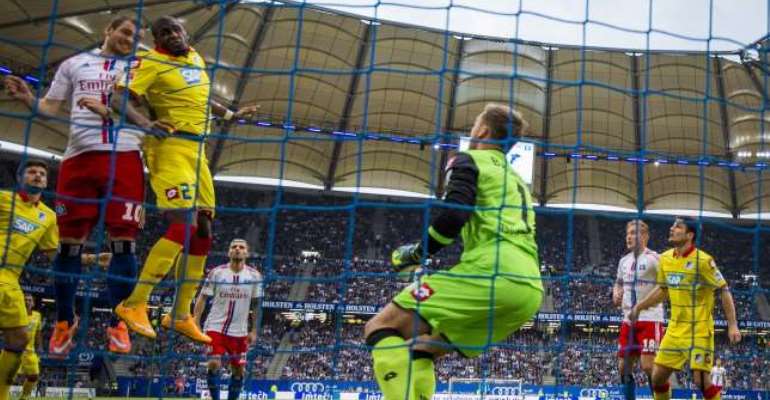 Markus Gisdol's side took the lead after 15 minutes when a sweeping counter-attacking move saw Pirmin Schwegler find Anthony Modeste behind the home defence, allowing the Frenchman to coolly slot home.

The goal was a little harsh on Hamburg, who were buoyed by their triumph over Borussia Dortmund before the international break, displaying plenty of attacking intent for much of the first half.

And they were rewarded for their persistence, creating a counter-attacking move of their own 11 minutes before half-time which was well finished by Pierre-Michel Lasogga.

That strike opened the game up, with Hoffenheim's Tarik Elyounoussi missing a one-on-one chance, before Roberto Firmino hit the post.

Lasogga lashed an effort against the crossbar as Hamburg searched for a winner, but Hoffenheim held on to deny the hosts their first home league win of the campaign.

Sunday's other game saw newly promoted Paderborn battle back to claim a convincing 3-1 win at home to Eintracht Frankfurt.

A closely contested game came to life 11 minutes after the break when Alex Meier gave the visitors the lead with his fifth goal in as many games.

But Paderborn fought back and were level 10 minutes later courtesy of Marvin Ducksch's stunning volley, which was roundly appreciated by the 15,000 fans packed into the Paderborn Arena.

And the win was wrapped up five minutes from time when substitute Stefan Kutschke reacted quickest to Suleyman Koc's deflected pass to round the goalkeeper and slot home with a cool finish.

The win ends a run of three games without a victoru for Andre Breitenreiter's side, who move above Frankfurt into seventh place.