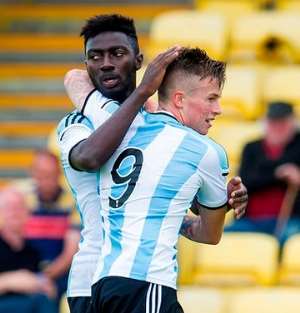 Senegalese midfielder Morgaro Gomis is keen to re-establish his partnership with Ghana midfielder Prince Buaben at Hearts of Midlothian.

The duo formed a solid partnership at Dundee United four seasons ago under Craig Levein, who is now the current director of football at Hearts, and then Peter Houston.

The 26-year-old Ghanaian is continuing his trial at Riccarton and scored in a friendly against East Fife on Saturday and Gomis is eager to see his club strike a deal with the man who helped him produce some of the best form of his career.

“It was good to play with Prince on Sunday,” said Gomis. “I've known him for quite a while. We started playing together in 2008 and he's been one of my best friends since then. We just understand each other's game. We don't even really need to speak to each other on the pitch – we just know where the other one is. It's very natural and we have a good connection.

“The manager wanted to bring the two of us and I signed first. I've been having a quiet word in his ear but it's his decision. I don't know what will happen but I hope we can sign him. They're talking to him just now.

“He's a very good player, who likes to keep the ball and he's powerful. He has good experience as well, which would be good for us as we have a young squad.”