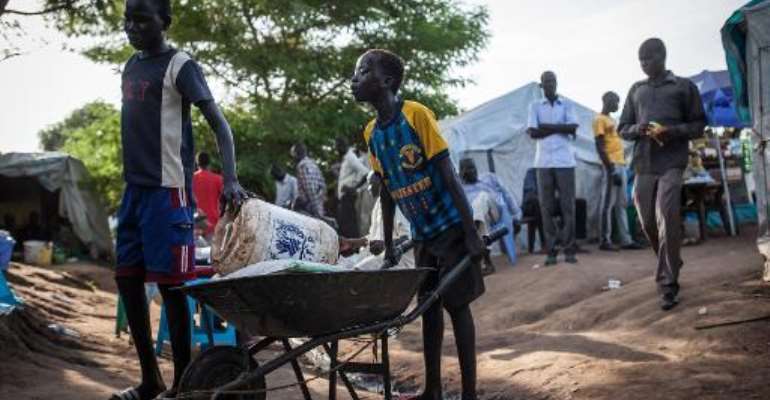 Boys push a wheelbarrow with goods at the Tomping Internally Displaced Persons (IDP) camp in Juba on July 2, 2014. By Nichole Sobecki (AFP/File)

Juba (AFP) - Famine will break out in war-torn South Sudan within weeks unless massive funding for food aid is provided, aid agencies warned on Thursday.

"If the conflict in South Sudan continues, and more aid cannot be delivered, then by August it is likely that some localised areas of South Sudan will slip into famine," Britain's Disasters Emergency Committee (DEC) warned, a coalition of 13 major aid agencies.

Thousands have been killed in the conflict in the world's youngest country, while more than 1.5 million have been forced to flee since the war broke out in mid-December. Peace talks are stalled.

The United Nations has around 40 percent of the cash it needs, with a shortfall of over a billion dollars (760 million euros).

"There is a very real risk of famine in some areas," DEC chief Saleh Saeed said, warning that "millions of people are facing an extreme food crisis."

Famine implies that at least 20 percent of households face extreme food shortages, there is acute malnutrition in over 30 percent of people, and two deaths per 10,000 people every day, according to the UN's definition.

Rains this year are hoped to be around average or slightly below, according to UN experts, with hunger caused by fighting not extreme climatic conditions.

The DEC coalition, which includes agencies such as Oxfam, Tearfund and Save the Children "have less than half the money they need to help prevent the growing food crisis in South Sudan turning into a catastrophe," Saeed added.

Fighting between forces of President Salva Kiir and troops loyal to rebel chief Riek Machar has been marked by widespread atrocities.

Kiir and Machar committed themselves last month to a third ceasefire deal, and agreed to forge a transitional government within 60 days, but fighting continues.

On Monday Doctors Without Borders (MSF), which has earned a reputation for working in some of toughest war zone conditions across the world, said the situation was the worst it had seen in years, even during the two decades long war that paved the way for South Sudan's independence three years ago.