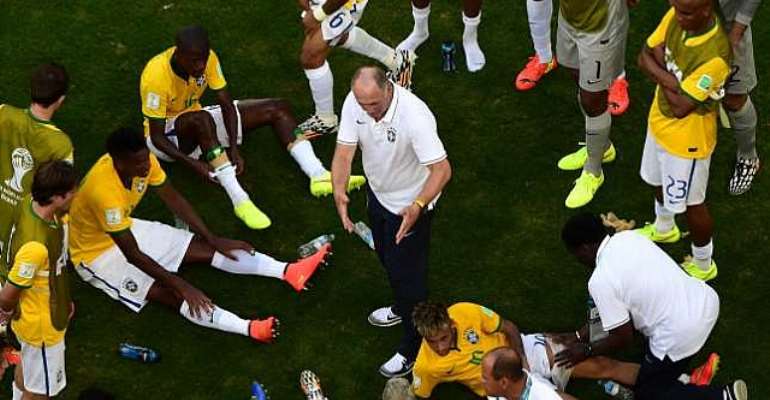 It's a sight synonomous with winners - from Garrincha to Pele, Jairzinho to Ronaldo; one that draws on the passion of a vast nation, and the footballing world as a whole. A combination that immediately brings with it an element of fantasy and wonderment.

It is such magic that football fans have been longing to see from the moment that Brazil was chosen as the host for this year's FIFA World Cup.

This one, they had to win - so much so that the architect of their last success on the biggest stage, Luiz Felipe Scolari, was whisked from an increasingly nomadic managerial existence back to the top job.

The head coach is the same, and there is also a talismanic figure - Neymar filling the void of Ronaldo, whose eight goals led Brazil to glory in 2002.

That, however, is where the similarities to the memories of Brazil's glorious past end for the class of 2014.

While Ronaldo was backed up by the brilliance of Rivaldo and Ronaldinho 12 years ago, the supporting cast of the current generation is hardly as noteworthy.

It showed up in a disjointed Group A campaign as Hulk and Fred, in particular, struggled. But if they resembled blindfolded boys in a maze as the hosts made it out of the first phase, Neymar was a man with a map and compass, shepherding his followers to the exit.

The very nature of modern football tells us, that - unlike in 1986 when Diego Maradona stole (and England fans would say broke) hearts in Mexico - one man cannot do it alone. Just ask Cristiano Ronaldo and Portugal.

These days, others are required to step up, especially against a relentless and impressive opponent like Chile - who showed that they would not make things easy in the first of this year's last-16 clashes the Estadio Mineirao.

On Saturday, as a nation expected, the early omens for Brazil were not good: the customary blue shorts replaced by white ones to accommodate their opponents' red-blue combination.

Even when David Luiz's opener (or Gonzalo Jara's own goal depending on your viewpoint) apparently settled home nerves, there was a twist in the tale as Alexis Sanchez levelled.

From that point on, it was largely about toil for Brazil. Another 90 minutes of it.

And with Neymar operating on the periphery, others were indeed forced to take centre stage.

The sight of Hulk's ungainly step-overs does not evoke thoughts of Pele and the like, nor does the manner in which defenders bounce off his frame.

Yet on the night it was key, the 27-year-old showing the kind of driving power that would have made his fictional alter ego proud.

Pretty? No. Effective? Yes. Brazil needed a driving force against the unrelenting buzzing of red shirts to take them into the World Cup quarter-finals and Hulk provided that.

In many ways, his effort was an embodiment of this current Brazil team.

It may not posses the verve of the five before them that have hoisted this cup aloft, yet in front of a vast sea of screaming fans - and inside the pressure-cooker environment of penalties - they did not wilt.

And in Neymar, they do have that little nod to the illustrious past, the talisman who can take them that extra step.

It seems, too, he will be there when it matters. With Hulk losing his way when the penalties came, suddenly the score was 2-2 and Neymar was stepping up to take Brazil's fifth kick.

He did not let anybody down either; a run, stutter and finish later, Chile needed Jara to find the net for the right team this time.

Instead, he struck the inside of the post, and order had been restored: Brazil were heading to the quarter-finals.

But unlike their famous counterparts of years gone by, this Brazil side still leave more questions than answers.