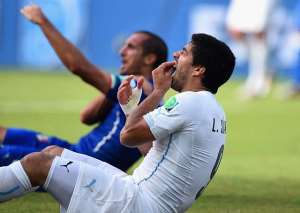 Following an overwhelmingly positive beginning to the FIFA World Cup in Brazil, the finals were somewhat overshadowed on Tuesday by the actions of Uruguay's star man, Luis Suarez.

Approaching the last 10 minutes of the final Group D clash with Italy, Suarez sunk his teeth into the shoulder of opposing defender Giorgio Chiellini, an action missed by the match officials but picked up by various television cameras.

Uruguay's Diego Godin scored the winning goal shortly afterwards to send his side through to the second round, but it was Suarez's retrospective punishment that dominated the news.

FIFA handed the Liverpool striker a four-month ban from all football activity, including a nine-match international suspension.

The news comes as a huge blow to Uruguay, who are now shorn of their major goal threat, with Paris Saint-Germain's Edinson Cavani expected to take over that particular burden.

Various members of the Uruguay camp, including coach Oscar Tabarez and captain Diego Lugano, have come out in defence of their colleague, but the world game's governing body took a strong stance against Suarez, who had twice been found guilty of biting opponents before Tuesday's incident.

Like Uruguay, South American neighbours Colombia have been denied the services of their talisman, although Radamel Falcao's absence from the tournament due to a knee injury is something Jose Pekerman's side have coped with admirably.

Drawn in Group C along with Japan, Ivory Coast and Greece, Colombia were impressive in qualifying, winning all three matches and scoring nine goals in the process.

Monaco playmaker James Rodriguez has made a name for himself as one of the stars of the tournament so far, and was outstanding as a second-half substitute in the 4-1 win over Japan on Tuesday, creating two goals for Jackson Martinez as well as adding an impudent finish himself in the final minute.

As one of the form teams in the finals, Colombia will approach Saturday's clash at the Maracana confident in their chances of overcoming a side far from convincing in their three group fixtures.

In addition to the absence of Suarez, Uruguay may have to cope without Lugano, who continues to struggle with a knee injury, while Colombia have no new injury or suspension worries as they bid to reach the quarter-finals for the first time in their history.