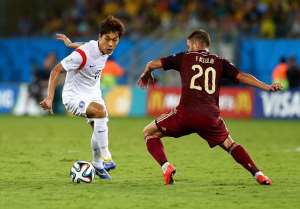 Park has endured a turbulent time at club level since leaving Monaco for Arsenal in 2011, but Choi Kang-hee and his predecessor as South Korea coach Hong Myung-bo have both stuck by him.

The 28-year-old disappointed in a loan spell at Celta Vigo during the 2012-13 season, before managing just two appearances for Watford this season.

Despite such inactivity at club level, Hong picked the forward for the World Cup and Kim, who was in charge at the 1994 World Cup, has been left underwhelmed by his performances as South Korea go into their final Group H match needing to beat Belgium to have any chance of staying in the tournament.

"It is obvious that Park has been the biggest disappointment on the roster," Korea Joonang Daily quote Kim as saying.

"But it doesn"t mean that he (Hong) will just take Park out of the starting line-up, because Hong still believes that Park is the type of striker who can match his football style, which emphasises passing.

"That was why he only used the 196-centimeter Kim Shin-wook as a wildcard in the second half."