2014 World Cup: Nigeria lose to Argentina but qualify for round 16 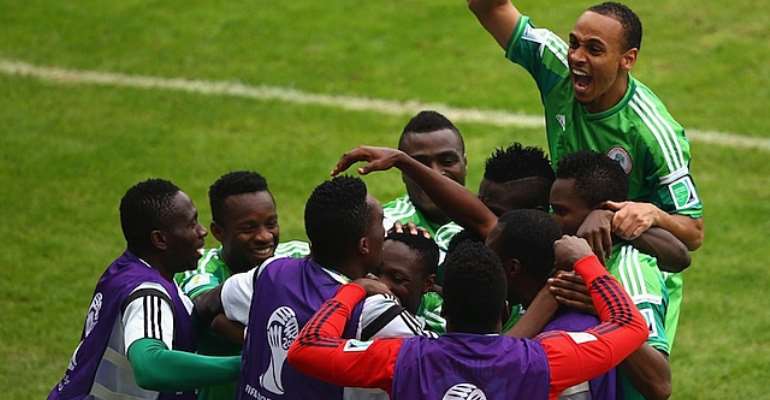 African champions Nigeria have qualified for the World Cup knockout round of 16 despite losing 3-2 to Argentina in a thrilling final Group F match in Porto Alegre on Wednesday.

Bosnia-Herzegovina won the other group game against Iran 3-1 to finish third on three points.

The Super Eagles thus became the first African team to reach this stage of the tournament and it is only the third time they have done so after they advanced in 1994 and 1998.

Argentina went in front after just three minutes through their talisman Lionel Messi, who blasted home a rebound when Di Maria's shot crashed against the post after the South Americans ripped open the Eagles defence.

However, Ahmed Musa drew Nigeria level a minute later, when he latched on to a through ball, cut back before he let fly past goalkeeper Sergio Romero.

In first half, stoppage time, Messi restored his team's lead when he curled his free kick from outside the box beyond a stranded Vincent Enyeama.

This was after the Lille shot stopper had turned away for a corner a similar Messi free kick for a corner.

Ahmed Musa netted his brace in the 47th minute when he dashed through the Argentina defence after he was set up by Emenike.

But Rojo scored his first international goal when he restored Argentina lead three minutes later, when it appears he helped the ball inside the net with his knee.

Enyeama again proved to be the stumbling block for Argentina and Di Maria with several big saves.

Argentina controlled the ball from the first half and attacked in waves for the opening goal.

Enyeama was called to duty after nine minutes, when Angel Di Maria fired home from distance and almost immediately Higuain threatened to double his team's advantage.

Osaze Odemwingie shot wide in the 27th minute from 20 yards.

After 37th minute, Argentina were forced to replace the injured Sergio Aguero.