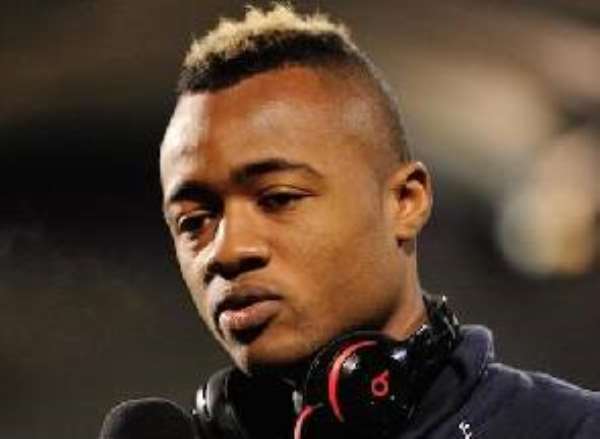 It's been a mixed start to the World Cup for Kwasi Appiah and his Ghanaian team.

After rumours of a player revolt following the opening round loss to the USA on day five of the tournament, they now have a major task on their hands to make it out of the so called 'The Group of Death'.

However, after having 63% of the possession and 21 efforts on goal – including that beautifully worked equaliser – in the match against the USA and their exciting performance against Germany, Ghana will feel their campaign is far from over especially as they look set to face Portugal who are have not been convincing.

And Jordan Ayew will be a key figure in the African nation's fight back.

The Marseille man, whose brother Andre scored the equaliser on Saturday evening, looked in great touch throughout the warm-ups netting a hat-trick against South Korea in the final game before touching down in Brazil, and will be hoping that alongside his brother, he can catapult the Black Stars back into contention for the second Round for only the third time.

They'll certainly think they're owed it following the 2010 finals. A controversial incident in the last minute of the Quarter Final against Uruguay, which saw Luis Suarez hand-ball on the line, cost them their place in the semi-final. It's unlikely that any African team will make it to that stage this time round.

With World Cup Group G odds of 8/1 most experts are in agreement the Black Stars are facing an uphill battle. However, if James Kwesi Appiah's men can make it through to the next round, things start to look whole lot prettier.

South Korea could be an opponent in the knockout phases, who the Ghanaians have already dispatched once this month with Ayew being right at the very centre of that.

His domestic season hasn't been half bad either. The 22-year-old spent the second half of the season on loan at Ligue 1's Sochaux where he scored five goals earning himself his call-up to the World Cup squad.

But with the team up against Cristiano Ronaldo to name a few over the remaining group game, it won't be just the energy and pace of Ayew that will be relied upon, but the experience of his team-mates too.

The likes of Michael Essien, Asamoah Gyan, and Kevin-Prince Boateng will need to put all their domestic and international experience into good use if they're going to take anything from the games, whilst Kwadwo Asamoah's defensive abilities will be vital in keeping out Ronaldo.

The side will take a lot of positives from the game against the Germans on Saturday evening, they dominated in large spells, but with a loss against the weakest side – USA – in the group , it will take something almighty special for them to reach the heights of 2010 from here.