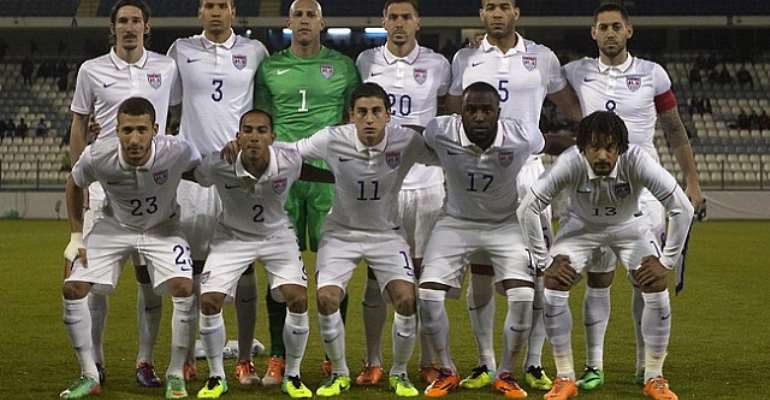 When the draw for the 2014 FIFA World Cup was announced last December, the U.S. men's national team could only shake its collective head.

The good fortune that accompanied the 2010 draw completely abandoned them this time around, leading to a murderers' row of opponents in Ghana, Portugal and Germany.

Since then, most observers are picking the U.S. to depart after three games, and it's purely down to the strength of the opponents.

“The U.S. may play an exceptional World Cup, and it still might not be good enough to get past Portugal, Germany or even Ghana,” ESPN television analyst and former Venezuela international Alejandro Moreno said.

But every World Cup has a group where the form book is shredded. Who would have predicted that in 2010 Italy would finish bottom of a group that included Paraguay, Slovakia and New Zealand? With that in mind, here's what needs to happen for the U.S. to advance to the knockout stages.

U.S. needs to get lucky
One only needs to think back to the 2002 World Cup in Japan and South Korea to see the impact luck can have. The U.S. stumbled in the group finale against Poland, losing 3-1, and with South Korea and Portugal headed for a draw, it looked like the Americans would be eliminated. Instead, Park Ji-Sung popped up for a late goal the Koreans didn't even need to advance, eliminating Portugal. The U.S. parlayed the gift into a quarterfinal finish.

In this instance, the luck meter that was reading empty following the draw seems to be creeping back in the Americans' direction. Ghana forward Majeed Waris is dealing with a quadriceps injury. Marco Reus, Germany's most in-form attacker over the past few months,  is out with torn ankle ligaments . Portugal's Cristiano Ronaldo is battling patellar tendinosis, while teammates Raul Meireles and Pepe have been dealing with injuries, as well, though all three played in Tuesday's  5-1 rout of Ireland .

These are the kind of ingredients that lead to the underperformance of a presumed favorite, which will need to happen for the U.S. to advance.

“I'm not saying the U.S. is going to get out of the group, but the odds are slowly turning here,” ESPN television analyst and former U.S. international forward Taylor Twellman said.

Americans must seize the day
The best way to manufacture luck is for every player to perform to his maximum, but there are some key players upon whom the U.S. will rely heavily. Tim Howard will need to be immense in goal. Michael Bradley will need to excel — as he so often does — on both sides of the ball. Jozy Altidore will need to be a beast with his back to goal, and the skill and trickery of Clint Dempsey must be at an otherworldly level. Oh, and the latter two will need to finish, something a U.S. forward hasn't done at a World Cup since 2002.

“Every half you're going to get two to three good looks, and you have to score one of those,” former U.S. international Jimmy Conrad said. “If you don't do that, you'll be watching the knockout stage at home.”

Center backs Geoff Cameron and Matt Besler, both of whom will be experiencing their first World Cup, will need to get up to speed quickly, as well, although the vastly experienced Howard will do everything he can to help in this regard.

“I think Cameron and Besler are better than we're giving them credit for, and they're very good,” former U.S. international and current Fox Soccer analyst Eric Wynalda said. “They're going to be just fine in this World Cup. And Howard is one of the best goalkeepers in the world. I think all this negativity is giving them motivation.”

Communication and team shape have been huge points of emphasis ever since the start of the pre-World Cup training camp back on May 14. Cameron and Besler will need to excel in this area, as well.

“The center backs see the whole field, they are the ones who have to organize and put guys in good spots to make plays,” Conrad said. “The better they can do that, the easier the game is going to be for everyone. It means less chasing of the ball.”

The U.S. must also maximize its set-piece opportunities.

“I would say against all three teams, we'll have the upper hand on offensive set pieces,” Columbus Crew head coach and two-time World Cup veteran Gregg Berhalter said. “In my opinion we'll be better in that area, and as we all know that's a big part of the game.”

Survive Ghana
U.S. manager Jurgen Klinsmann has made no secret of how important the first game is against Ghana. Yes, it represents the chance to secure three points, but what if both the Ghana match and Portugal's game against Germany end in draws? What is the message then?

“It's important then at the end of 90 minutes, regardless of how the [first] game goes, that there's enough presence, enough leadership to make sure we're getting ready for the second game,” U.S. midfielder Michael Bradley said on Tuesday. “Good result or bad results, there's still two games to play, there's still 180 minutes left to turn things around.”

But obviously three points is preferred, and the Americans' defensive game plan will have a huge say in the team's success that day. Throughout his tenure, Klinsmann has attempted to get the U.S. to press higher up the field, but that seems ill-advised given the speed of the Black Stars' attacking players.

“Against Ghana, I don't think you want to be one-on-one in the back,” Twellman said.

Fortunately for the U.S., Klinsmann seemed to hit upon a tactical game plan last weekend against Nigeria that looks well equipped to deal with the Black Stars. The U.S. essentially stayed compact in the back with Bradley and Dempsey dropping deeper in midfield to provide a stronger shield alongside Jermaine Jones and Alejandro Bedoya, and in front of Kyle Beckerman. This should help to negate the potency of midfielders Kwadwo Asamoah and Andre Ayew.

The U.S. will also need one of Altidore or Dempsey to get whatever Ghanaian midfielder brings the ball out of the back out of his comfort zone. When the ball is won, the U.S. will need to engage the warp drive and get the ball forward quickly and accurately.

Twellman added, “If Jozy Altidore is that big, strong guy, holding the ball up, running the channels, then you have your two best attacking players for the U.S — Bradley and Dempsey — with some space underneath.”

And through it all, the U.S. must match Ghana's athleticism and physicality.

“I think if you punch Ghana in the face in your first 20 minutes and let them know that you're not going to let them get into rhythm, then you've got a shot,” Twellman said.

Solve the Ronaldo dilemma
At this point, it looks as though the possibility of Ronaldo missing the U.S. match due to injury is becoming more remote. An ESPN FC report indicated that the Portuguese international has been  declared fit for the team's opener against Germany  on June 16, and he played 65 minutes on Tuesday against Ireland. Without Ronaldo, Portugal has looked decidedly average. But with him, he affects what opponents do on both sides of the ball.

“If you are the U.S., you know you can't commit too many numbers forward with Cristiano Ronaldo on the counterattack,” Moreno said. “You know that Fabian Johnson is not going to go up and down the right-hand side if Ronaldo is there. How adventurous are you going to be in attack? How many risks are you willing to take? And then defensively, it conditions you in that you have to know where he is at all times.”

For that reason, a wide-open contest is to be avoided at all costs. Sweden found that out the hard way in the second leg of the World Cup qualifying playoff against Portugal, when the Swedes took some risks in attack and Ronaldo exploited the available space by scoring a hat trick. For that reason, the U.S. would be advised to follow the lead of Israel and Northern Ireland, both of whom secured road draws against A Seleção in World Cup qualifying.

“Portugal struggles against anyone that has a good defensive posture,” Twellman said. “They struggle building. They can't do it. I think the U.S. just has to defend — not park the bus — and say, 'You can have possession, go ahead. Try to figure it out.' And then the moment that ball is won, go. It's an interesting dilemma.”

That will also involve putting the clamps on Portugal midfielders Joao Moutinho and Meireles, assuming the latter plays. Both are adept passers who look to find Ronaldo in space when the ball turns over.

“If you give Moutinho time and space, we're dead,” Conrad said. “I think the best way to stop Ronaldo is to suffocate the guys that give him the ball. If we can do that, and make Ronaldo drop deeper and deeper to pick up the ball, because he's going to want his touches, we'll find ourselves in a good position.”

All of this is easy to talk about in theory, but difficult to implement. That said, it's not impossible, especially in the heat and humidity of Manaus, conditions that U.S. players are more used to dealing with.

“Portugal can be broken down,” Twellman said. “If Israel and Northern Ireland can do it, the U.S. can do it.”

Send the Germans wide
Even without Reus, Germany is the class of the group. Potential replacements like Lukas Podolski and Andre Schurrle are potent attacking players who can change a match. Add in performers like Thomas Mueller, Mario Goetze and Mesut Ozil, Germany can turn just about any defense inside out.

“Germany has six guys flying all over the place without a true center forward,” Twellman said. “Good luck. Defending that is a different problem.”

But one that has a potential solution. With manager Joachim Loew taking only one striker — the ageless Miroslav Klose — to Brazil, Germany has essentially played Goetze as a false nine. It makes for a dynamic attack, but there are times when the lack of a traditional striker can create problems in terms of latching on to service from out wide.

“For me, how you beat Germany is similar to how Real Madrid beat Bayern Munich in the UEFA Champions League semifinal,” Conrad said. “Give them all the width, let them hit crosses. The outside backs can't get beat, because then the center backs have to come over. But keep everything in front of you, and without Marco Reus, they lose that guy who makes late runs into the box. Goetze will do it, but it's usually when he has the ball, not when he doesn't have the ball. The loss of Reus will hurt.”

Germany also has some defensive holes that can be exploited. While Sami Khedira looks to have returned to full fitness, Bastian Schweinsteiger hasn't, meaning Philipp Lahm may be needed in the center of midfield. That leaves Benedikt Howedes and Jerome Boateng — both of whom are center backs by trade — to man the fullback slots.

“I just think Germany can be had,” Twellman said. “You can bet that there will be a time when six guys get caught up field and they're in trouble. But you have to be so efficient when you go forward with those opportunities. That's the key.”

Reality check
What's outlined above is the equivalent of hitting triple seven on a slot machine. In a group this daunting, the margin for error is perilously thin.

Will it? It seems like at every World Cup there are teams that exceed expectations, whether it was Turkey and South Korea in 2002, Ghana and Australia in 2006, or Uruguay in 2010. The U.S. will be determined to be that side this time around.