Kwadwo Asamoah closing in on Seria A title with Juventus 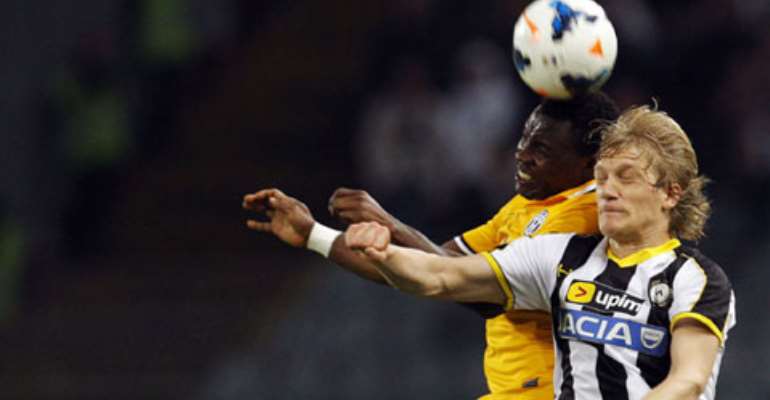 Juventus' Kwadwo Asamoah (L) jumps for the ball with Udinese's Dusan Basta during their Italian Serie A match on Monday.

Kwadwo Asamoah's Juventus inched closer to their third Seria A title with a comfortable 2-0 win over Udinese on Monday night.

The Ghanaian international was once again an instrumental piece for the league leaders as they opened an eight-point lead the summit of the table with five games remaining.

Italy's Giovinco opened the scoring with a sweet curling strike after 16 minutes and fellow World Cup hopeful Llorente of Spain tapped in his 14th of the season following a goalmouth scramble at a corner 10 minutes later.

“This was a potentially dangerous match and we could not afford to drop points,” Juve coach Antonio Conte told reporters. “The title race is still open and we did well.”

Without top goalscorer Carlos Tevez, it was left to Giovinco to provide Juve with thrust up front and his second of the season was a signal to Italy boss Cesare Prandelli that he was not to be forgotten.

Cutting in from the right, he whipped in a superb shot with his left that flew past rookie Udinese keeper Simone Scuffet, who was unsighted by four players.

Tiny Giovinco was unlucky in the 69th minute when managing to squeeze off a shot after impressive close control in the area only to see his effort rebound back off the post.

Juve were comfortable enough to substitute their match winners with Mirko Vucinic and Pablo Osvaldo to see out victory before Luis Muriel hit the post for Udinese in stoppage time.

Udinese stay 14th on 38 points after a flat performance befitting a side that has all but mathematically secured Serie A safety and has little left to play for.

Francesco Guidolin's side are 13 points clear of the drop zone and were playing two years to the day since the tragic death of their player Piermario Morosini, who died after suffering a heart attack and collapsing on the pitch while playing on loan at Livorno.