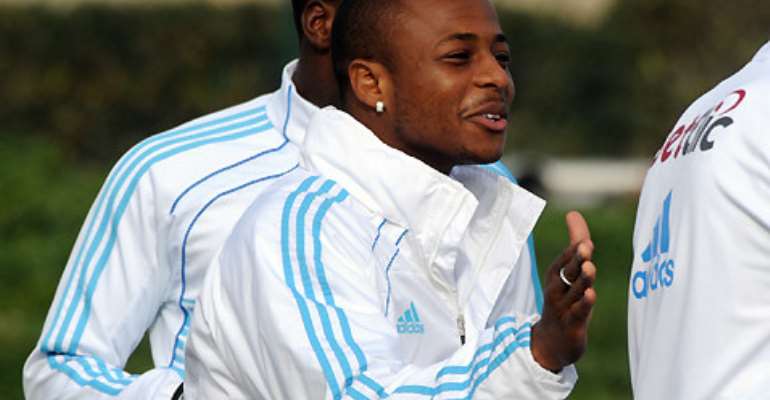 Being arguably the son of a country's greatest soccer player ever in Abedi Pele comes with its own expectations, but being the son of a club's Champions League winning squad member comes with even greater pressure. Unfortunately for one young man, that is the circus within which he finds himself.

Born Andre Rami Morgan Ayew in Seclin, France, 'Dede', as he's affectionately known, currently finds himself trying to lift a 'struggling' former Champions League winning club as well as trying to carry the hopes of an entire nation about taking on the world in this summer's major footballing tournament.

On the 19th of November, 2013, when Andre got injured in his country's last World Cup qualifying tie away in Egypt, it wasn't Ghana that felt the pain of having to do away with one of its most influential players, nor was Ghana the team to helplessly sense a looming danger; it was Olympique de Marseille.

Andre Ayew had, hitherto, played with the brakes off in all of Marseille Ligue 1 games in season 2013/2014 with the only exception being the 1-1 draw with Toulouse and had already scored twice plus an assist. Prior to last Saturday's 3-0 win over Bastia, Marseille had won 5 of their past 12 games after Dede's injury as well as 4 draws and 3 losses. If anything at all, the club had suffered fewer losses in his absence in the Ligue 1. One might, then, be tempted to say that Dede's absence had not really changed the pattern of Marseille's performances after all. But that is not the case.

Marseille came into the 2013/2014 campaign on the back of a second place finish the season before amid some substantial loss in personnel in Morgan Amalfitano, Modou Sougou, Charles Kabore, among others. For most clubs, the beginning of every season was sure to come with some level of new challenges and Dede happened to have been around at the time. Mind you, the statistics show that he was one of Marseille's top performers at the time when most of his other colleagues were down.

It is then normal to think that with most of the players finding their feet as the season progressed, Dede, and for that matter Marseille, should experience a major performance lift but for his untimely injury. His 2 goals in 4 matches in the Champions League are testament of Dede's importance in the current Marseille set up. And for the many who thronged the Stade Velodrome vs SC Bastia, it wasn't only to see Marseille play – it was also to see the return of a great son of the club whose ability to lift his team and supporters in difficult games had been long missed.

It wasn't just his availability that Marseille had missed within the past three months; it's his presence; his charisma; his workaholic nature; his ability to hold the ball at his feet, his constant track backs to help in defence and his desire to take on defenders.

It wasn't just the change of having to play without his younger brother Jordan that Dede noted on his return to the Velodrome; there was also a change in the manager who led the bench in his last game against Reims prior to his injury. Former Sporting Director, Jose Anigo, had taken over the reigns from Elie Baup following a series of bad results. From one angle, that should be welcome news as Anigo had been at the club for a while albeit in a different capacity and shouldn't finding it difficult finding Dede where he should best operate with the World Cup looming.

One thing that will, however, not be new to Dede come June will be the World Cup. After featuring in the 2010 edition in South Africa as a 20-year-old, that previous experience should serve him well as Ghana seeks to better her quarter-final spot from four years previous come Brazil 2014. Dede knows too well that he must remain fit for the 'mundial' as a squad slot remains a surety should he be able to do so.

Dede may be only 24 but he's already got the whole world watching. He's  carrying a whole nation on his young shoulders. Dede is back; perform he must.