Ghana, Libya through to CHAN final 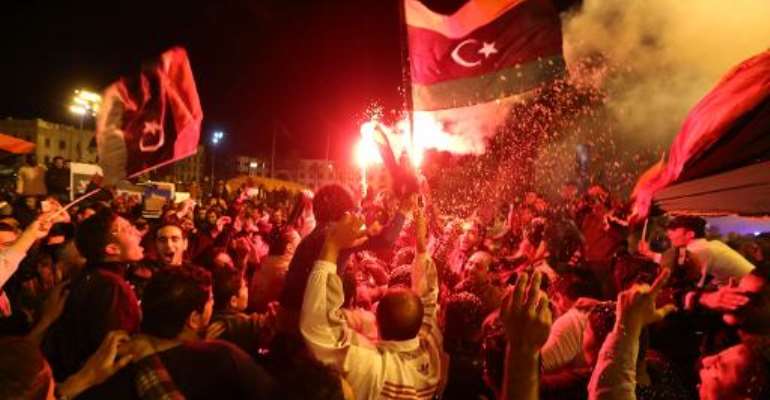 Libyan football fans celebrate in Martyrs' Square in the Libyan capital Tripoli on January 29, 2014 after the national team defeated Zimbabwe in its African Nations Championship semi-final match. By (AFP)

Bloemfontein (South Africa) (AFP) - Ghana and Libya reached the final of the African Nations Championship on Wednesday by winning their respective semi-finals on penalties when their matches ended 0-0 after extra-time.

The Ghanaians will seek to go one better tha the 2009 tournament where they lost in the final to the Democratic Republic of Congo.

The Black Stars stunned Nigeria as their players held their nerve better than their opponents to win the penalty shootout 4-1.

The Ghanaians had done well to hold the Nigerians scoreless as they pounded Ghana's goal.

Nigeria's star player Christantus Ejike scored his side's solitary penalty, despite suffering from concussion after crashing into Kwabena Adusei early in the first half.

Ghana hope to have better luck than the last final, when they lost 0-2 against the Democratic Republic of Congo in 2009 in Ivory Coast.

Libya booked their spot for Saturday's match by beating Zimbabwe 5-4 in penalties.

Libya keeper Mohamed Abdaula was the hero for his side, saving Zimbabwe's final penalty before converting a spot kick of his own in the shootout, which saw 16 penalties taken.