Ghana vs Egypt: Egypt will suffer from the return of Vorsah and Boye in the Black Stars’ defense 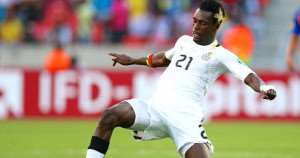 http://en.africatopsports.com/wp-content/uploads/2013/11/John-Boye-2.jpg The return of Ghana's defensive duo Isaac Vorsah and John Boye could make the return leg of the 2014 World Cup play-off difficult for Egypt next month.

The two players missed the 6-1 first leg drubbing at the Baba Yara stadium due to injuries.

While Boye only missed the tie against the North African country, Vorsah has not been involved since he played in the opening World Cup group D game against Zambia in Ndola.

The two defenders are expected to make a return to the side ahead of the return leg fixture in Cairo on November 19 as they would have recovered fully ahead of the game.

Vorsah was ruled out for six months after suffered a serious injury while playing for Austrain side Red Bull Salzburg.

Boye, who plays for French side Stade Rennes, is fast recupering after going under the knife to fix a thigh problem.

Their potential return to the team is expected to boost the defense of the team ahead of the return fixture at the Military stadium in Cairo.

The country's weakened defense excelled during the 6-1 win over Egypt with Rashid Sumaila and Jerry Akaminko putting up a brave performance against the Pharaohs.