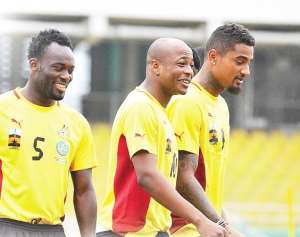 Schalke ace Boateng will have to undergo further treatment at his club side before joining his international teammates.

The 26-year-old's physical frailties are a major concern after missing the corresponding fixture due to injury.

He aggravated his trouble knee injury last Wednesday in Schalke's UEFA Champions League defeat at Chelsea but recovered to play the entire duration in the Bundesliga on Saturday.

Boateng scored two goals as the Royal Blues clawed back from a goal down to beat Werder Bremen 3-1 at the Veltins-Arena.

Essien was in Ghana over the weekend to supervise the burial of his late father.

The Chelsea ace has been permitted to report late to camp.

Meanwhile, the rest of the 22 players listed by Kwesi Appiah are expected in Turkey by Monday night.