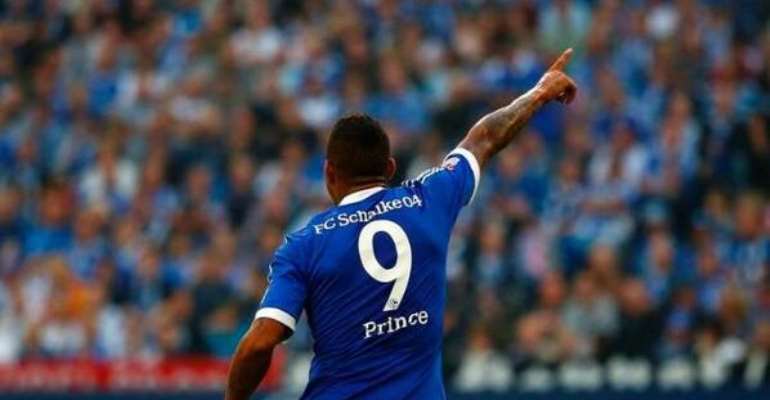 By Ameenu Shardow
Schalke coach Jens Keller is relieved by his decision to play Kevin-Prince Boateng in the 3-1 win over Werder Bremen despite the Ghana forward's fitness issues.

The 26-year-old led a sensational comeback with two thumping headers to help the Royal Blues to the vital win on Saturday.

Boateng was however a major doubt for the Bundesliga clash at the Veltins Arena haven sustained yet another injury in midweek.

The Ghana international was feared to spend some time on the sidelines after picking up the injury in Schalke's Champions League defeat at Chelsea.

The ex AC Milan star however made a quicker than expected recovery to become a surprise inclusion in Keller's starting line up – a decision many believed was too much of a gamble.

Boateng went on to turn in a Man-of-the-Match performance by grabbing a brace while lasting the entire duration to help the side recover from an early slump to win the game.

The Ghana forward's impact to the game was massive – drawing many plaudits at the end of the match.

Coach Jens Keller who also came in for some praise is happy his decision to recall Boateng from the treatment table on short notice paid off.

“The boys wanted to turn the game around, they have shown great determination,”

“The decision to summon Kevin-Prince Boateng into the team very late proved to be the right one (smiles).”

Boateng has now succeeded in getting himself into great shape just in time to join up with the Black Stars to finalize their preparations towards the second-leg of the World Cup playoff against Egypt.

The ex Germany youth international is yet to make a playing return to the Black Stars since reversing his decision to retire from international football three months ago.

He is now very much in line to make his first Black Stars appearance in over two years when Ghan travel to Cairo to face the Pharaohs on November 19.