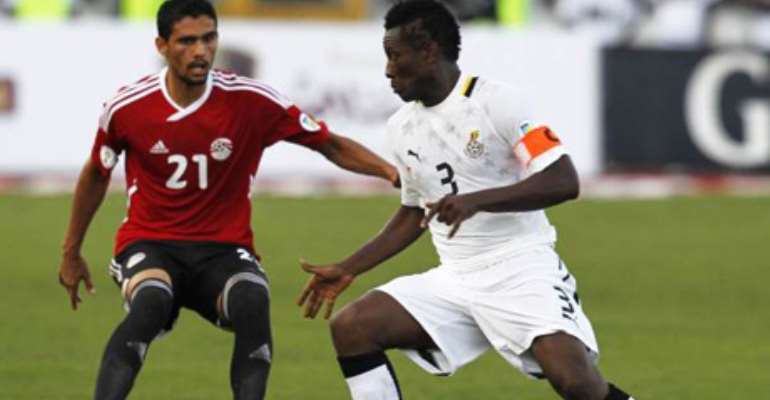 Asmoah Gyan has no fears ahead of Cairo showdown

Ghanaian authorities are unhappy that FIFA have rejected two appeals for the game to be moved from Cairo due to safety fears.

The world governing body ruled that the North African country has given security guarantees for the game, which will be the first international match held in the capital for more than two years.

But Ghana captain Asamoah Gyan has allayed the fears of soccer fans, insisting they have come too far to miss out at the final stage.

“We appealed to FIFA earlier because of the political tension, but they sanctioning the venue is enough proof that the venue is safe for use,” Gyan is quote by Daily Guide

“Wherever FIFA asks us to play the second leg, we will defeat them. We are approaching the game as if we are the underdogs.

“I am in touch with my colleagues on regular basis and you could feel how ready they are for the game. We are only praying for strength and a good day.

“We have come too far to miss the Brazil 2014 World Cup bus. We don't want to miss it, we are determined to give our best shot, and that alone is enough motivation to conquer them at their own backyard. Ghanaians should relax and continue to pray for us for a good day. We won't disappoint them,”

Political and social unrest has led to disturbances in Egypt since the overthrow of President Morsi, while football in the country has been deeply affected since the Port Said riot in 2012 that led to the deaths of more than 70 fans.

The aggregate winner will qualify for next year's final in Brazil and Ghana are heavy favourites to book their place.