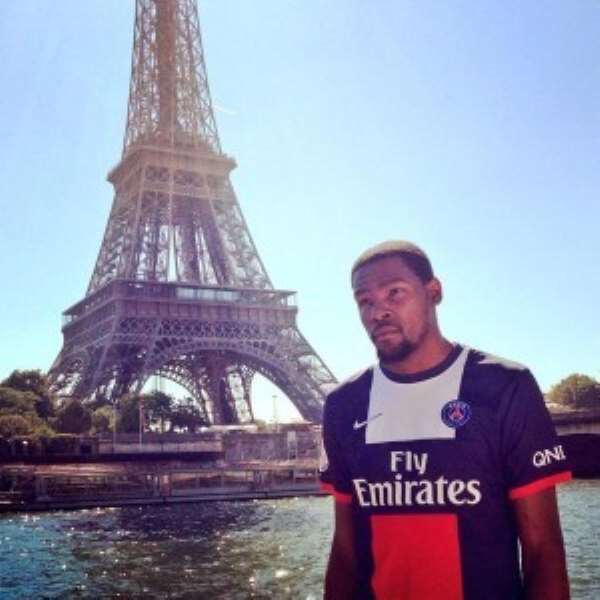 http://en.africatopsports.com/wp-content/uploads/2013/09/durantpsg-300x300.jpg This summer, many NBA stars have revealed their love for football and for some big clubs in Europe. We happened to see Kobe Bryant and Derrick Rose 's pictures wearing the AC Milan shirt.

Kevin Durant was passing by last weekend. And we can see on social networks this picture of the player of Oklahoma City Thunder making the buzz. Durant is a big fan of PSG.

Catastrophic transition to Grand Journal
During his stay in the French capital, KD was received Tuesday on the set of Grand Journal of the Canal + channel. An appearance that should not remain in the annals of television. Three ridiculous questions ( “Kevin, you play in Oklahoma Thunder, where is Oklahoma City?” “You would not prefer to play in Los Angeles or New York?” “And what do you think of French players in the NBA? “ ), the host of the show turned into a man-basket and is more funny with the other guests of the board to listen to the answers that the guest star.

Canal + TV no longer has the TV rights of the NBA in France. It is its rival BeInSport that will broadcast matches of the most prestigious basketball championship this season.

Watch the video of this very annoying interview. http://www.basketusa.com/news/180758/kevin-durant-au-grand-journal-genant/