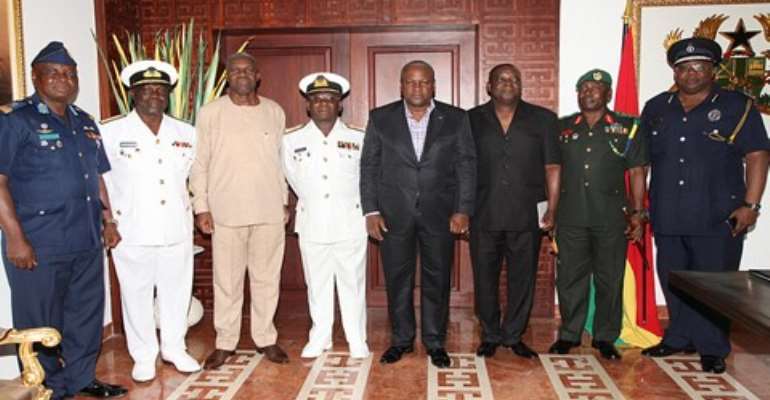 President Mahama and the Security Chiefs

Led by the CDS, Vice Admiral Matthew Quarshie, the IGP and Service Commanders called on the President after Monday's Change of Guard at the Flagstaff House to congratulate him on the Supreme Court's validation of his election in December 2012.

The Change of Guard ceremony continues to attract the interest of the general public with this month's edition attracting many spectators including students from the Commonwealth and Volta Halls of the University of Ghana.

The relevance of upholding the Change of Guard ceremony is to embrace unity in diversity, where the three arms of the Ghana Armed Forces- Army, Air Force and Navy, come together for a common purpose. It also instills strict discipline in personnel, which is an essential tool for national cohesion and development.

President John Mahama instituted the Change of Guard ceremony on 5th May 2013 and takes place on the first Monday of every month.