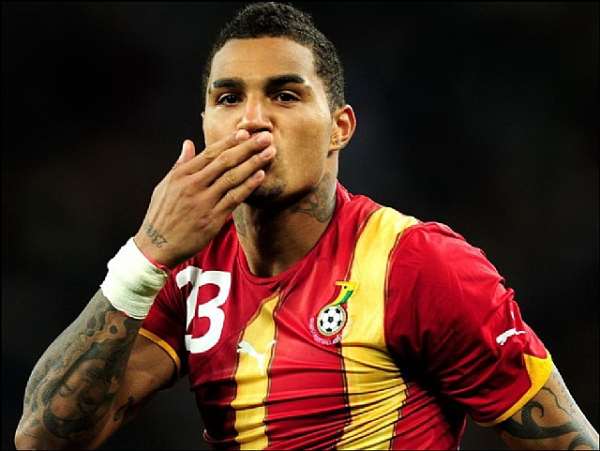 Kevin Prince Boateng's letter rescinding his retirement from international football has been accepted by the Ghana FA who have also welcomed his Milan team-mate Muntari back into the fold.

Kevin's return means the Black Stars would have a quality attacking option back in midfield. The competition for places in Kwasi Appiah's midfield is going to be especially fierce with both Milan players returning and Dede Ayew's awaited return.

Ghana normally lines up in a 4-2-3-1 formation with Gyan either leading the line or playing in the centre of the 3 attacking midfielders (the hole).

If Appiah hands him a call-up, it would mean Asamoah Gyan moving up to the centre-forward role permanently and KPB either playing as a 10 or trequartista behind Gyan like he did to devastating effect behind the Swede; Ibrahimovic for Allegri's Milan during their Scudetto triumph. For a team lacking in goal-threat, he can help Gyan by shouldering some of the scoring burden.

He could also partner Kuban Krasnodar's Rabiu Mohammed in front of the back 4 where he would be the more attack minded of the two defensive midfielders and drive the team forward from deep; sort of like Paulinho at the Confederations Cup when he partnered the much more defensive-minded Gustavo in Brazil's midfield.

The 'BOA' is competent on the right flank and can put in a decent shift if required, though he struggled when he played there against Congo in the only match he played in Ghana during his first spell.

His return though, is going to rub a lot of Ghanaian football fans and Black Stars players the wrong way because the cynical lot will point to the fact that he used Ghana to get a good deal by playing in the World Cup and left when we needed him most.

His comeback is at a time where Ghana is probably three crucial matches away from qualifying for the Mundial in Brazil, this may be seen by some as too convenient. But 'the Prince' would know that in football, the only way to silence your critics is to put in good performances on the pitch (unless you are as lucky as Rafa Benitez).