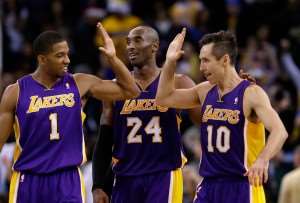 The Los Angeles Lakers' 113-102 win over the Sacramento Kings.

Antwan Jamison had 27 points and nine rebounds in the Los Angeles Lakers' 113-102 win over the Sacramento Kings.

Jamison was 8-of-14 from the field and 5-of-8 from 3-point range for Los Angeles, which has won six of its last seven games. Steve Nash added 19 points and 12 assists, while Metta World Peace finished with 22 points in the win.

“Everybody contributed, it starts on the defensive end. We moved the ball tonight. We were able to knock down shots and make some big stops at the end,” Lakers guard Steve Blake said.

Kobe Bryant did not play due to a sprained left ankle and the flu.

Isaiah Thomas netted 26 points to go with six assists for the Kings, who have dropped four of their last six contests. Patrick Patterson tallied 22 points and five boards in defeat.

Sacramento turned the ball over just six times and hung around before the Lakers finally pulled away in the fourth quarter.

Marcus Thornton's jumper pulled the Kings within 90-88 with 8:36 left in the stanza before the Lakers embarked on an 11-0 run to put the game away. Consecutive 3-pointers by Blake, Nash and Jamison concluded the burst and gave LA a 101-88 edge midway through the fourth.

“Our guys did a good job competing. They put themselves in a great position, but they (Lakers) made some big threes against us,” Kings head coach Keith Smart said.

Earlier, LA took a 33-27 lead after a quarter of play, but Sacramento outscored the Lakers 29-23 in the second to knot the contest at 56-56 heading into the break.

Thomas' layup pulled the Kings within 73-72 with 4:49 remaining in the third before LA closed the period on a 13-4 run. Jamison had six points during the surge and Blake's triple with three seconds left capped it and vaulted the Lakers to an 86-76 advantage heading into the fourth.

Tonight D'Anthony and Nash will face their former franchise, Phoenix